What first drew Mike to Felix were his marvelous black and white markings, followed promptly by his purr-sonality!

“After meeting a lion (Maine Coon), a temperamental heterochromic (a kitty with two different colored eyes), two lazies, a hyperactive kook and a four-legged paper shredder,” laughs Mike, “all Felix wanted was some positive attention in his little back room. Two minutes after we met, he was purring and head butting me.

“When I brought him home, his adjustment was immediate. And it wasn’t long before he had earned the nickname ‘Little Horse’ because at seven pounds, he gallops down the halls loudly enough to be mistaken for a draft horse.

“I always say ‘who needs TV with a kitty clown like Felix around to keep me entertained’? My other cat isn’t always as amused by his antics as I am, but he does tolerate him – up to a point.

“Definitely a combination of energetic and easygoing, he loves chewing on dried lamb’s ears, carries Chinese finger trap sticks around with him, and takes great pleasure in ‘killing’ the feather on the string that I dangle in front of him. 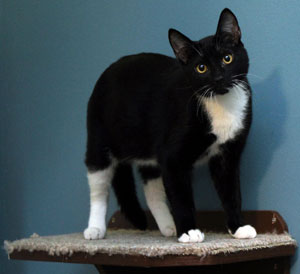 “He’s also fiercely independent, and although he likes being petted, he’s still not one hundred percent certain about being cuddled … so I’d have to say ‘kind of’ when it comes to cuddling.

“One of his particularly silly quirks is flopping around in the sink — any sink — even one with water in it.”

So it’s not surprising to learn that Felix’s favorite place to sleep at the moment is in a bathroom.

“If left to his own devices,” Mike concludes, “he would simply yowl all night.”