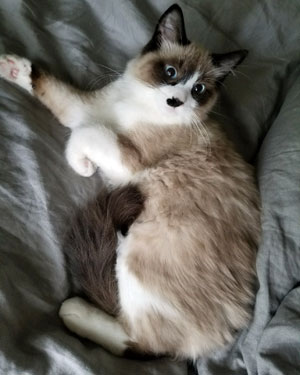 “This is our second kitty,” Lindsay explains. “His original name when we adopted him was Aspen and we renamed him Orbit since his birthday fell on the same day as the solar eclipse.

“What drew us to Orbit was the fact that he was so cute and different looking, and after meeting him, it was a done deal. He was quite timid when we first brought him home, but after a few days he seemed completely comfortable. Having attached himself to me almost immediately, he’s become my little buddy, and since our son, Travis, never had a kitten before, it’s been a fun experience for him.

“For the first week, our other cat, Mims, didn’t know what to think of him, but she finally warmed up, and now they’re the best of friends. She tries playing mom and even ‘bathes’ him …LOL.

“Although he does have his kitten crazies, he’s a pretty mellow guy. Like all kittens, he’s very curious, he loves to play, and he’ll keep going if you let him. He especially loves anything with a feather on it. And he’s affectionate. He loves being petted and cuddled every chance he gets.

“When we adopted him, we were told he was a Snowshoe, but as he gets older, I think he might be a Ragdoll mix. He’s super fluffy, soft and floppy, and he’s developed these cute markings as his fur has darkened. His toe fur is especially long! 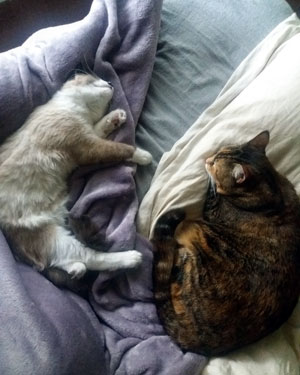 “As for quirks? He chatters if you hold a toy above him, which is pretty adorable. And because he’s so super floppy, he’ll sometimes fall off the bed or the furniture because he’s not paying attention. Also he really enjoys watching basketball on TV! Nothing else has interested him except for the film, ‘March of the Penguins.’

“For the first few weeks, Orbit basically slept on my face! Now he sleeps wherever he can fit on the bed.”