“When we adopted Raspberry in November 2017, she took to us right away and slept in our bed the first night,” says Sharon.

“At Christmas, Santa brought her a scratching post and more toys than she already had, while her ‘human’ sister even gave her presents. A bit of a fussy feline when it comes to food, she likes dry cat food but won’t touch wet food unless there’s gravy in it, and even then, she’ll lap up the liquid while leaving the rest! She will, however, eat bits of sardines and anchovies. If she likes what we eat, we’ll sometimes give her a small taste, and when we have a snack, she feels she’s also entitled to one. 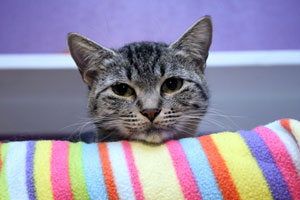 “She’s quite a bundle of energy and loves to explore all over, often following us into the garage to sniff around. She also loves looking out the various windows, and when she sees a bird, she starts chattering. Although she’d like to go outside, we don’t let her, nor do we feel she’s ready for a harness and leash. She sometimes plays roughly, then just as quickly gives us kisses, and although she abhors her flea treatments, she gets over it about fifteen minutes later.

“To say she’s a fan of water is putting it mildly, because she not only has a fountain for water, but she’ll leap up onto the bathroom sink to drink from the faucet and jump into the bath tub.

“She understands ‘let’s go to bed’ very well. If I’m having a bad day because of the pain I’m in, she does her best to comfort me by either letting me pet her or by playing and being silly. She also knows that she’s pretty much in control and that she’s very much loved.

“In short, Raspberry is a delightful baby girl, and we’re so happy to have her in our lives.”