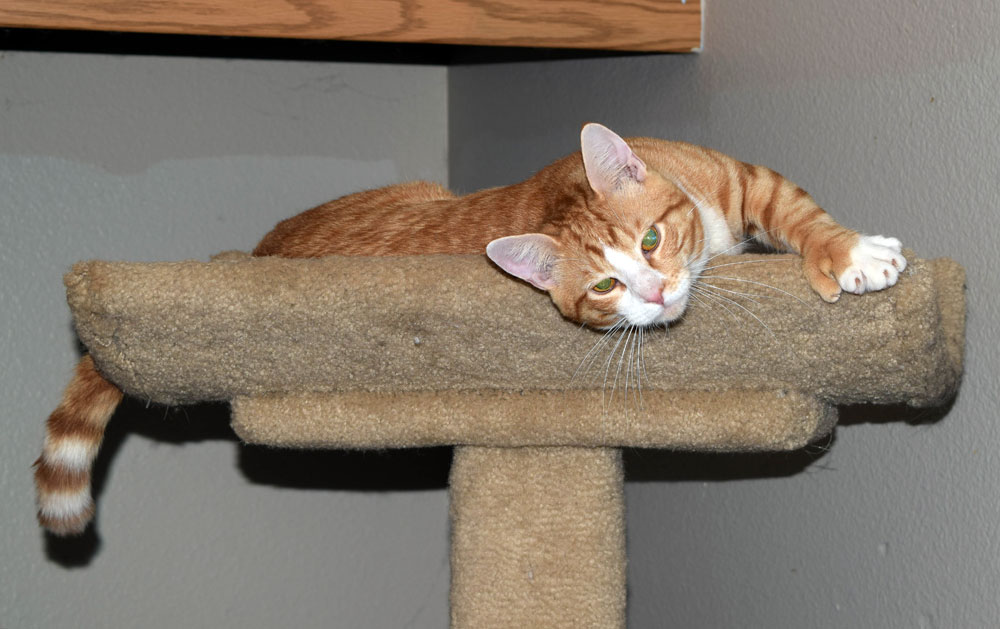 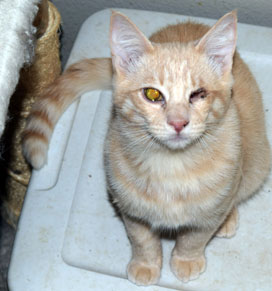 Bandit is one of two kittens that were missing an eye. 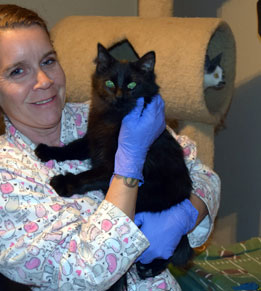 Foster mom Dena Hugh had to gown up each time she entered the kitten room.

Ten kittens were rescued from a hoarding situation in Cowlitz County in June. We were told the kittens were relatively healthy, this was not the case. We should have known that hoarding and healthy do not go hand in hand. By the time they reached Furry Friends we were committed to helping them.

They were suffering from flea infestations and eye infections, missing eyeballs and persistent upper respiratory infections, most of the kittens also had ringworm, an extremely contagious and difficult disease to treat. Having already committed ourselves to taking them in, Furry Friends promptly had the ailing kittens examined by our volunteer, licensed veterinary technician while other volunteers began bathing, syringe feeding, and administering fluids to them to combat dehydration. The smallest kitten weighed 12 ounces; the largest weighed 3 pounds.

All of them were put on antibiotics and brought to their vet to confirm the ringworm diagnosis. Too small and fragile to be treated with the usual prescription drug, a medicated bath protocol was begun instead, and while the ringworm and upper respiratory infections were tenacious, both conditions are finally close to clearing up.

Two of the kittens each missing an eyeball are presently scheduled for surgery to cleanse and permanently stitch the lid over the empty socket closed at an estimated cost of $1500 a kitten. The kittens have already cost Furry Friends around $5000. Once fully recovered, they will undergo two rounds of requisite vaccinations, be spayed/neutered, micro-chipped and put up for adoption.  We anticipate these kittens costing Furry Friends around $10,000.

As of November 7th all kittens have been cleared of ring worm.

It is now more than five months since they have arrived on our doorstep. As of November 7th they have been cleared of the ringworm. They can now proceed on to vaccinations, spay/neuter, microchip and then adoption. The kitties have gained a lot of weight and have been thriving under the care of foster mom Dena Hugh. On Tuesday, November 27th we will have a special fundraising day in conjunction with #GivingTuesday to help cover some of their medical costs.

To view a video about the kittens and their foster mom, Dena Hugh, click here

Those interested in contributing to Furry Friends #GivingTuesday initiative can visit https://furryfriendswa.org/donate/ . Facebook will be matching some funds made through that platform on Tuesday, November 27. Visit the Furry Friends Facebook page https://www.facebook.com/furryfriendswa/  For more details about the #GivingTuesday movement, visit their web site at www.givingtuesday.org.