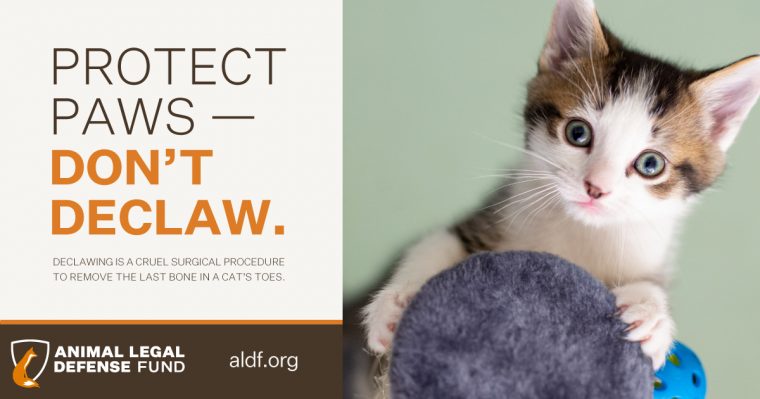 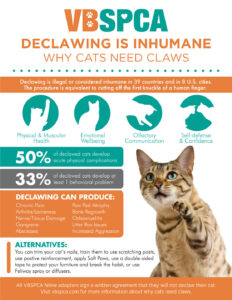 Let’s talk about Onychectomy! What in the world does this word mean? Declawing. This is an operation to remove an animals claws surgically by means of amputation of the end bones on an animals toes. Popular misconception is only the nail is removed since the name means “nail excision” but since the phalanges are removed it would be better termed as a phalangectomy or surgical removal of the phalanges. Would this deter people from declawing if they knew it was similar to cutting off your own finger up to the first knuckle and not just removing your nail?

Declawing is not only physically cruel but can also pay a huge mental toll on your animal. Recent studies have shown that litter box issues, aggression, and overgrooming were significantly higher in cats that had been declawed than ones not, from three to seven times higher! Another health issue that is caused from declawing is chronic back pain. You have altered their natural gait by doing this. Many cats will favor sore paws which can throw off their hips and back. They can have paw pain forever!

With all surgeries there are risks so why put your loved furry family member through that risk so they don’t scratch your couch? There are other ways to re-direct this behavior like scratching posts, anti-scratch tapes, scratch pads, etc. A major surgery that can leave life-long pain is not the easy answer anymore. Some states and countries have even made this illegal. Hopefully Washington will one day also make it illegal to help stop this barbaric practice.

Furry Friends has seen first-hand the major ramifications de-clawing has on cats. Rosie was brought to us with paw infections from a botched declaw. They did not remove the last bone so her bone was actually growing out of her paw causing infection after infection. She had to have surgery and two toes removed. Her declaw was in 2016 which means she was in extreme pain for 6 years until she got her corrective surgery and for what? She didn’t know why she had to live this way as the first few years of her life she lived pain free until her de-claw. While the surgery will help with her pain she will have life long pain from this.

It used to be common practice because we just didn’t know the ramifications of how it negatively affects our cats. Now we do. We know. Do not declaw.