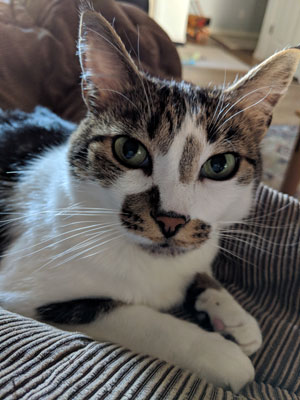 “We chose to adopt Stash (we kept his name since it suited him and he already answered to it) because he’s such a lover! He loves being petted and cuddled. He also loves sitting on our chests and rubbing his head on our chins. Plus he’s so soft that he’s impossible to resist.

“He came from a home where he had obviously been neglected, and so it took him a few weeks to figure out that he was part of our family. He didn’t request anything or interact with us at first. I had to pick him up in order to pet him. He had his own room to retreat to when needed, until he was completely comfortable.

“He has a kitty sister, Blaze, and a Boston bull terrier brother, Ruger. He and Blaze get along very well. They play together and chase each other, chatting away, around the house, especially at night when everybody has gone to bed! They also hang out together in my son’s room where they each have a pillow to sit on and look out the window. It took Stash a little longer to adjust to Ruger, who, let’s say ‘tolerates’ him. 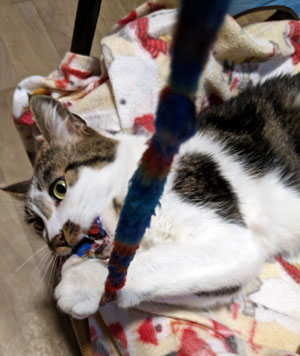 “He has a few favorite toys and they are all in the same area of the living room. He prefers to sit in the middle of his toys, then take turns playing with each one. He likes shoestrings, so he has his own shoe; a feather wand toy we play with together, and a fuzzy toy that looks like a dead animal.

“When we sit out on the back patio, if he can’t see us, he sits at the door and meows until I come over to him. If we open the window, though, he’ll sit in the window quietly and listen to us talk.

“As for sleeping, it’s his choice, and he likes switching things up. Usually he sleeps in my son’s room with Blaze. He also has a bed in my room that he sometimes uses. Every once in a while, he sleeps by himself in the living room. If I get up in the middle of the night, he always joins me regardless of where he was sleeping. He’ll then cuddle with me until I fall asleep again on the sofa.

“Stash is such good company, and he’s been a great addition to our family. It makes me feel good to watch him now that he knows he’s loved! He interacts, jumps up in my lap when he wants to be loved, makes demands – for food and for play — and greets us when we come home.”