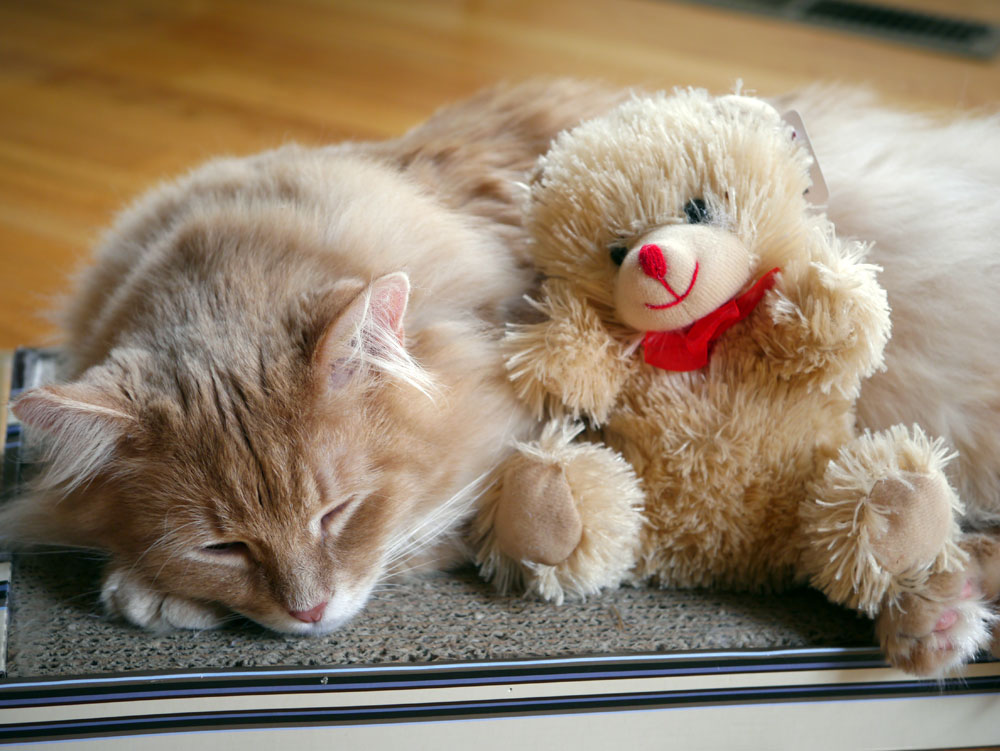 “What to say about Casanova that hasn’t already been said!” exclaims one very excited Vickie. “In a lazy moment, I call him Cas, but more often buddy or my little friend.

“In chatting with Sandy at the Halfway House, she told me that Casanova had diabetes and needed insulin therapy twice a day, monitoring of his glucose level and watching for any subsequent reactions. He was so needy — frantically bumping his head against my hand as if to say, ‘help me’, then rushing to ravenously eat, drink and use the litter pan.

“Having had experience administering insulin to a diabetic kitty, I volunteered to foster him. From somewhere deep inside, the offer just came out! Then I asked extensively about his behaviors, especially litter box issues and spraying, and was assured they weren’t problems at all, and so I became a ‘permanent’ foster mom.

“Well, the first thing he did when I brought him home was head straight for the bathroom and pee on one of my favorite rugs. I had to chuckle at the irony. I knew it wasn’t his fault. He simply had to go and was expecting to find a litter box. I picked him up, placed him in his box in its new location, thoroughly washed the rug, kept the bathroom door closed for a few weeks, and no more confusion.

“In addition to all the positives a feline companion brings, I think my husband and I have grown closer in Casanova’s presence. There’s always something to observe, plan, and share. Who can remain in a bad mood with Casanova around? 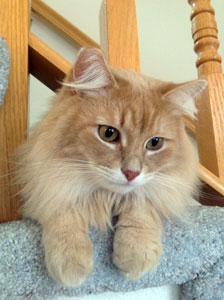 “He has more toys than all of our other kitties combined, and because he follows me everywhere, there are two or three toys in each room. He’s great at entertaining himself, but by far his favorite interactive ‘toy’ is his mom. He bats a shimmer ball at my foot to engage me in a lively soccer-like exchange, and he’s really quite adept at it. He loves hide and seek, especially in my home office, batting small toys behind, in or under various challenging spots, then when he can’t get them out, he whimpers, looks at me, whimpers, runs to me, runs back, then lies down and looks sad until I get them for him. He also tightrope walks on the rungs of the dining room chairs, reaching out his paw (with perfect balance) to snag any little mouse or feather I toss his way. He’s quite the entertainer!

“Every room has a comfy spot for him to nap, and once his energy wanes, he just stretches out in one of them and nods off. I think his favorite place is a basket my husband bought and placed in a bay window in the kitchen. It gives him a cat’s eye view of the backyard and everything we do. He’s ‘King of the House’, inside and out, and at night he keeps an eye on all of the nocturnal behavior in the yard.

“When he’s curled up sleeping, wherever that may be, I gently kiss his sweet little face and thank God for saving him and bringing him to us, and thank the special people at Furry Friends for their caring ways. The good news is that although he’ll always be diabetic, his diabetes is in remission and is currently being treated with a special diet and annual glucose checks. The bad news is that he’s predisposed to gingivitis, has already lost four teeth, and will likely need annual tooth cleanings. But we’ll handle that.
“We adopted him October 4th on the Feast of Francis Assisi. Happy tail!”