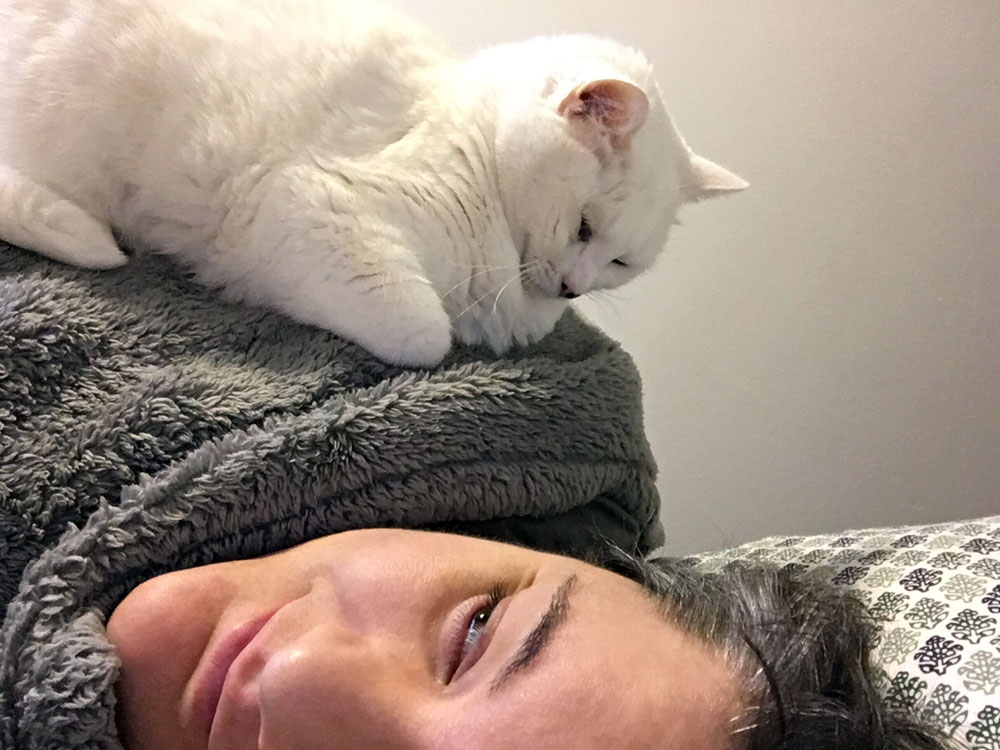 What a difference a name makes! Originally called Powder, a name this fabulous feline didn’t quite like, the moment her adoring adopters renamed her Cassie (“the little black spots on her nose reminded me of the constellation, Cassiopeia, ‘The Seated Queen’,” explains Kelly), she was in kitty cat heaven. 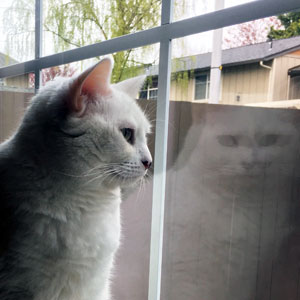 “My husband and I knew that we wanted an adult cat, one considered less adoptable for various reasons, and when I saw Powder along with several others, on Petfinder, I drove to the Hazel Dell PetSmart to see them. As soon as I saw her face, I started falling in love. After a brief chat with a volunteer, he let me slip into the cat room — just long enough to open her cage and meet her face to face. She immediately came up and bumped my forehead with hers, and I fell HARD. I brought my husband back the next day during the adoption event, and she was just as sweet and affectionate with him. We filled out the paperwork on the spot.

“Cassie took a while to get comfortable here,” says Kelly. “She never stopped being affectionate, and she loved being petted at all hours of the day and night, even when she was anxious. But we had to keep her in the bathroom for a few weeks until she became accustomed to us and to the apartment noises. And because she’s a picky eater, it took some trial and error before we found a combination of foods she liked.

“Now that she’s comfortable in her new home, she’s been such a source of joy for us. Just seeing her makes us smile, even when she’s not doing anything particularly noteworthy. No matter what she does, we always think it’s funny or cute! 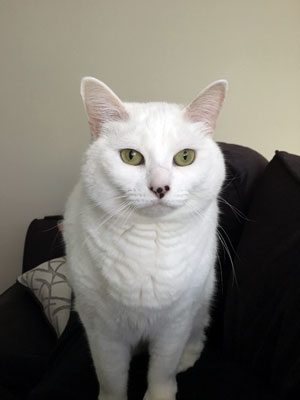 “At the start, she was pretty laid back and quiet, but now she chatters throughout the day and plays as much as possible. She especially loves chasing feathery stick toys – she either leaps into the air to capture the dangly bits or pulls the entire stick out of our hands, then struts proudly through the house with the feather ball in her mouth, and the string and stick trailing behind her. She also enjoys perching on top of her cat tree to see what we’re doing and looking out the window to meow at passing people and cars, dogs and squirrels.

“A combination of lap cat and independent kitty, she’ll sometimes sit on our laps, but once she’s done with that, she’s off to do her own thing. She HATES being picked up and whines and struggles if we try, but she loves being petted and brushed more than anything in the world. Not only does she love having her belly petted, she also LOVES having her nose rubbed — from the bridge all the way to the tip. I’ve never seen anything like it. She’ll even move her entire head to encourage you to pet her nose. It’s both adorable and hilarious!

“The more time that passes, the more Cassie comes out of her shell. We would have been more than happy to adopt a lazy, quiet, sleepy kitty, but this playful, funny, talkative girl is absolutely wonderful too! We’re just so overjoyed that she’s comfortable enough with us to be her ‘self’, no matter what that self is. We feel so blessed to share our home and our lives with her, and hope she feels the same way about us.”