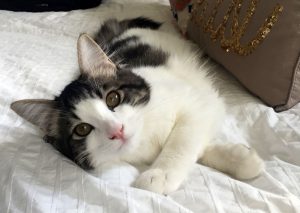 When Camille welcomed Finn (formerly called Ike, and short for Finnegan) into her home, little did she know that she had opened her door to a kitty cat whirlwind!

“I’d originally gone to the shelter to see two of Finn’s sisters,” Camille explains, “but the moment I sat down on the floor, Finn climbed in my lap, lay down and started purring. I knew instantly that he was the one.

“He adjusted to his new home immediately. Although he loved his 6-year-old kitty sister, Harley, as soon as they met and wanted to play and cuddle with her, it took her a little longer to get used to not being the ‘only child’ anymore. Then, within two weeks, they were best buds.

“Finn’s incredibly social and loves to meet new people and animals, but his favorite activity is getting himself into trouble. Despite having more toys than he could use in a lifetime, there’s no substitute for knocking things off the counter, pulling things out of the garbage, or pestering Harley. And because he happily eats any and all food, nothing is safe from him, no matter what the food is or how hard I try to hide it.

“He has more energy than I realized could be contained in such a tiny kitten. He literally bounces off the walls! He really likes running and playing in the hallway of my apartment building. As long as I’m home to watch him, I let him run around, but he’ll still try to sneak out whenever he can. Then, when I leave for work in the morning, I bring a toy with me to the door and throw it across the room for him to chase so that I can quickly slip out.” 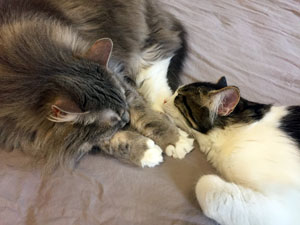 As affectionate as he is active, Finn gives new meaning to the term “lap cat”, literally lapping up attention like a thirsty cat sponge, and being at his most content in the evening as one third of their family’s loving trio.

“He’s generally on top of me when I’m home,” says Camille. “He also likes trying to pull my earrings out of my ears while I’m asleep. Seriously! He creeps up to me very slowly, wraps his teeth around them, and starts pulling until I push him away.

“Finn is the only cat I’ve ever met who enjoys having his tummy rubbed. He goes fully limp and lets me pet him for as long as I like. If he had his way, he’d sleep on top of my face or neck, but for the sake of my own sleep, I relegate him to the pillow next to me or hold him curled up to my chest. He can’t sleep unless he’s being held.”

And smitten Camille seems purr-fectly content with the arrangement!