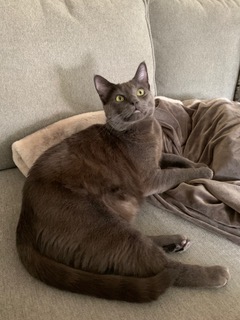 “Franky (short for Frankenstein) is the first cat I’ve had on my own,” says Jordan. “I grew up with cats — as many as four at once — and while I called one of them mine, when I left for college, they all became my mom’s cats.

“I may jokingly call myself a cat lady, but it’s true. I even tried unsuccessfully to talk my college roommates into allowing a cat, then resigned myself to waiting until I graduated to get one.

“I’m also a Halloween fanatic and intend to use Halloween theme names for all of them. When I began my search, I wanted a female (I decided her name would be Marnie from Halloweentown) NOT a male. The one male cat in my family was a bit of a grouch, but looking back, I think he just wanted to be our only cat.

“Then I found Franky’s photo on Petfinder and couldn’t resist him, even if he wasn’t the gender I wanted. Upon meeting him, I fell in love. He had the softest fur, the cutest face and the biggest ears. He was a bit shy, but I was patient and willing to put in the time to let him warm up to me on his own. He was originally named Rocco, but that didn’t fit into my Halloween theme and he adjusted well to the name change.

“He hid under my bed or the couch for the first few days, but slowly came out of his shell and was eager to play. Now, he’s extremely active (especially at 4 AM) and loves cuddling when I get home. We have a ritual where I walk through the door and he meows to be picked up and snuggled and scratched for a few minutes. He sleeps until I come home for lunch or after work, so he’s still sleepy when we snuggle and he tends to snooze for a few more minutes in my arms 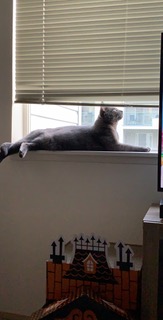 with the biggest purr.

“He prefers to nap on my bed, but if I’m home, he’ll also nap on the couch or on one of the four windowsills in my apartment, lying near the screen to catch a breeze, listen to the birds and watch the people outside.

“He’s obsessed with feather wands and gets so worked up when he chases after them that he actually pants in excitement as he jumps around. It’s the funniest thing to watch. He also loves plastic bags. He doesn’t chew them or lick them — he just loves jumping on them and hearing the sound they make.

“Adding Franky to my life was the best decision. He’s always waiting eagerly for me at home and is a great help when the rain and short winter days get me down.

“I love Furry Friends and I’m forever grateful to you!”