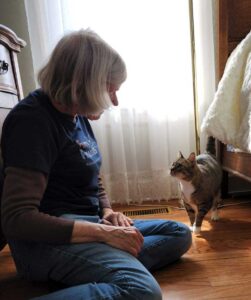 “Gideon (formerly Scarlett) and Piranesi (formerly Sammy) are my eighth and ninth kitties,” Freya says. “I’ve been fortunate in that most of my cats have lived long lives. And since they each preferred being the only cat in my home, I haven’t had that many.

“I chose these two (they’re named for characters in books I really liked) because they were older and less likely to be adopted. One of the reasons they adapted to living with me so quickly was due to my having visited them three times, so they already knew me. I volunteer at Halfway House in the medical room, and had met both of them soon after their arrival.

“I adopted them 11 days after my last kitty Aspen crossed the Rainbow Bridge. It was the longest amount of time I’d been without a cat since my first one in 1975. Not only have they have made the house feel like a home again, I’m thoroughly enjoying watching their personalities bloom, more and more every day. 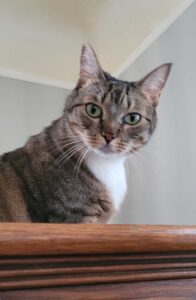 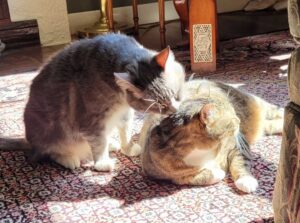 “They both LOVE fabric mouse toys, and although they have four, their favorite by far is a little orange one. While neither of them wants to be picked up, they love being cuddled. Every morning Gideon will sit on my lap while I read the newspaper and Piranesi will stretch out on the ottoman. It’s become our morning routine. And most of the time, day and night, they sleep on my bed.”

Friends Fur-Ever Stories are compiled and written by Nomi Berger who is the bestselling author of seven novels, one work of non-fiction, two volumes of poetry, and hundreds of articles. She is a volunteer writer for Furry Friends in Vancouver, WA and also volunteers her writing skills to animal rescue groups in Canada and the USA. She lives with her adopted Maltese named Mini.