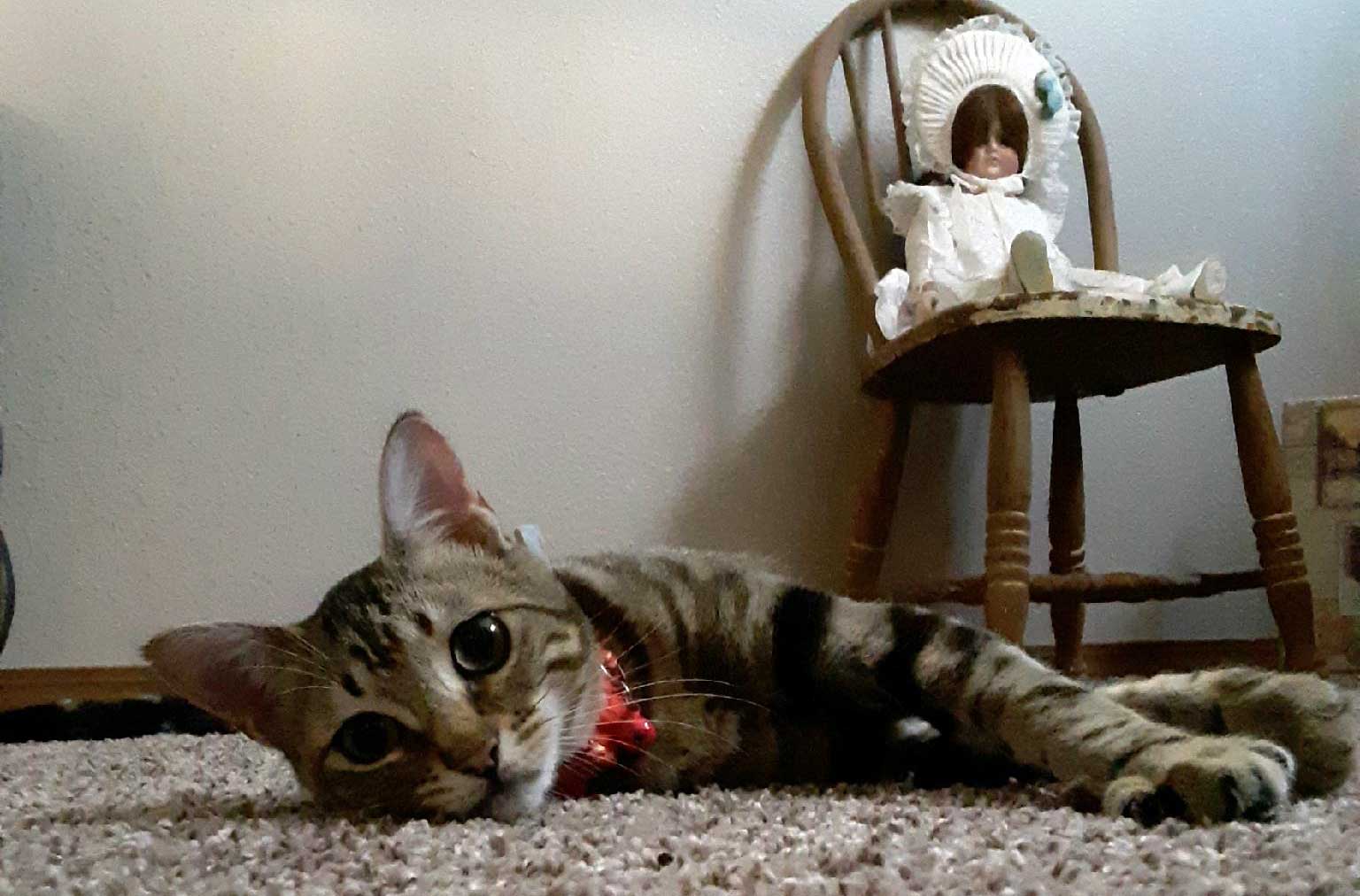 “We consider ourselves blessed to have had the opportunity of fostering sweet Gracie Jane (formerly Sassafras) before adopting her,” says Kathie. “She was semi-feral when she was rescued by Furry Friends and after meeting her, I just knew we had to bring her home. 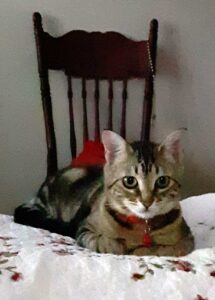 “She spent the first several weeks in her safe place (a bathroom) while my husband and I spoke softly to her and socialized her. Although she wasn’t too happy about it at first, she eventually began purring when we held her. Every sound was strange to her — the shower and the vacuum, the washer and the dryer – and we worked through each of them.
“She came into a home with a beagle, Maggie, and our three-year-old cat, Jojo. I would catch both of them with their noses under the bathroom door trying to get a glimpse of who or what was in there. Gracie and Jojo would even play under the door. A week later, we introduced them all briefly – so much fun!

“Once we formally adopted her and had ‘freed’ her from the bathroom, she promptly hid behind the dryer. Despite our eagerness to get our hands on her, we were determined to let her decide what her comfort level was and accept it. I provided her with food, a clean bed and litter box, toys and treats, then enticed her to play with a long ribbon on a wand. In no time, she took the bait! It wasn’t long before she reached out from her hiding spot, touched my finger with her nose and rubbed her cheek against it.

“She was now officially a family member. She had free rein of the house and we could hear her bell as she slid back and forth on the throw rug outside our bedroom at night. Two weeks later, she bounced out of her hiding spot into our presence. She was quick to retreat if she was startled but she was always brave enough to return. The next day, we all took a nap and she found a spot in our family room and napped too. What a sight! It told me that we were slowly becoming part of her comfort zone.

“Jojo has truly been a lifesaver during this whole process since Gracie watches everything she does and mimics her. It’s wonderful to shake the treat jar and have Gracie come running just as Jojo does. With cat beds all over the house, her favorite is one I placed in the living room in front of the window, and yet I often catch her upstairs in the one Jojo prefers and have to laugh.

“We’re still in awe of how quickly she’s progressed in so short a time. She now lets me pick her up and snuggle her and she’ll nap at one end of the couch when I’m napping. Highly active during the day, she loves dragging a sweatshirt string that she pulled from the laundry basket through the house, chasing after the laser pointer, batting ping pong balls around, and carrying her toys from floor to floor. She also loves playing ‘king of the hill’ with Jojo and watching the squirrels outside the front window with Maggie.

“She’s been such a blessing and such a beautiful addition to our family. Many thanks to Furry Friends for all you do.”