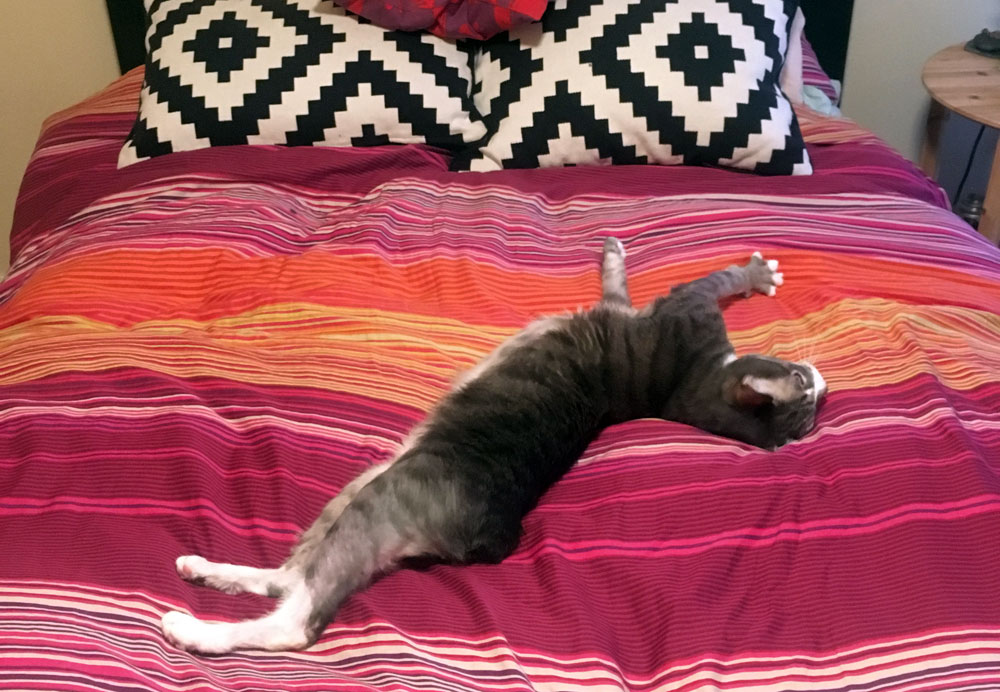 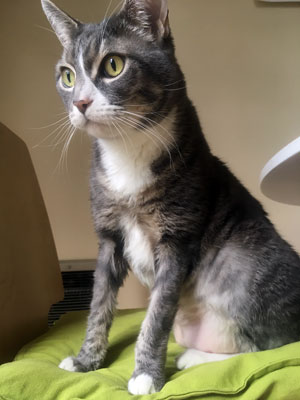 “While I grew up surrounded by cats, Jorgé (formerly George) was my first adopted cat,” says Kristen.

“I’d been volunteering at Furry Friends for almost a year and had met dozens of cats and kittens. I knew I wanted an adult cat since they generally aren’t adopted as quickly as kittens, but I just hadn’t met the right one. Then when I saw Jorgé at the Halfway House, I was immediately drawn to him – mostly because he had no tail! I later learned that nothing had ‘happened’ to it, that he’s a Manx, and wasn’t born with a tail. His personality drew me in, too. He’s friendly and talkative and LOVES attention, and we absolutely adore him.

“His adjustment period was short and sweet. Like most cats, he hid out at first under the bed or in the closet, but that only lasted a few days. We won him over with toys and daily brushing. I work from home, so it’s fun having another being here throughout the day. He’s pretty much my shadow and follows me no matter what room I’m in. For me, a house without an animal just doesn’t feel like home.

“He’s also been a great experience for my partner’s daughter who’s now nine, but was seven when we adopted him. We told her that our ‘friend’ George was staying with us for awhile, and she was so surprised and excited to find a cat in the house and not another human! 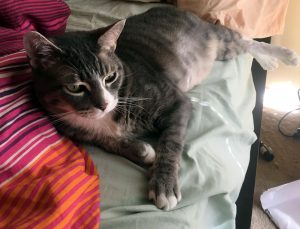 “Overall, Jorgé is easygoing, but he will get bursts of energy. He runs around upstairs, where we hear him thudding around, or else he runs up and down the stairs. We always get a good laugh out of it. He also loves lasers and anything on the end of a wand, like a feather or a leaf. We make a lot of our own toys for him with just a stick and jute, then I’ll tie something at the end of it. We also have a tunnel for him that he loves to hide out in so he can pounce on his ‘prey’ unexpectedly.

“Jorgé loves being brushed: you can win him over with that any time. He’s not much of a cuddler but occasionally he’ll curl up between our legs — especially if we’re covered in a warm, comfy blanket.

“If anything, Jorgé is very loyal. He loves his people and wants them around all the time. He tends to ‘go to bed’ when we do, too. He’s very much in tune with our routine. But he also enjoys finding the coziest spot in the house to hang out in without us. As I mentioned before, he’s very talkative – literally from morning to night! And, like a dog, he’ll greet us at the door when we get home from a day or night out.

“As for sleeping, he has a ‘scratch lounge’, which is basically a cardboard scratch board inside a box. He’s a large cat and it’s big enough to fit him, so it’s pretty common to find him sleeping in there. He loves sunny patches for summertime naps, and any soft surface with a blanket. Sometimes he’ll sleep between our legs, but that’s usually a wintertime thing.”

And speaking or meowing of winter …