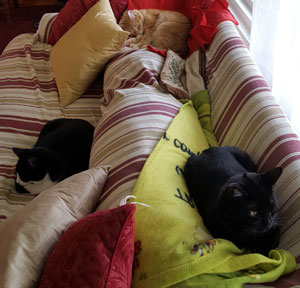 When Kahlua entered Briane and Heather’s world, he joined a household whose three other felines had the most wondrous and fanciful of names. There was Longshanks Longfellow, Tiger Tank Tillman and Roslyn Bridgette. And because he wasn’t especially enamored of his own name, he barely blinked when he was re-christened Louie Louie.

“I’ve had cats my whole life,” explains Briane, “and when it came to Louie, it was love at first sight for both Heather and me.

“He’s definitely made things very interesting around here, and by the second day, it felt as if he’d always been part of our family. A furry bundle of energy, he LOVES playing and playing with his new brothers. Longshanks Longfellow took a liking to him instantly, and as soon as Louie submitted to Tiger Tank Tillman, Tiger was happy to have him in the house as well.

“Roslyn Bridgette, on the other hand, is still warming up to him. She’s nearly 20 years old, so a kitten with energy to spare sometimes takes her by surprise, but they’re slowly making progress. 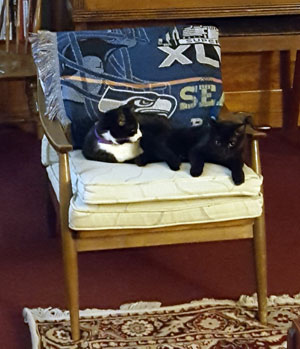 “Louie’s favorite game could easily be called ‘play with me, play with me’. He particularly enjoys playing with crinkle balls, with us, and chasing the laser light. To say he’s great is a real understatement! He’s also extremely bright and learns a lot simply by watching Tiger Tank and Longshanks. Heather and I love him very much and feel very lucky to have him.

“More of an independent cat, Louie likes his pets, but on his own terms. Although he still prefers coming to us to get them, he’s gradually growing into more of a ‘love me, pet me’ kitty. He does have a very loud purr motor, however, and will actually come when we call him – which is pretty unusual for a cat.

“Without a doubt, his favorite time of day is whenever Heather and I return home after being gone. It doesn’t matter where we’ve been — at work, out shopping — he’s just SO excited to see us! And when it’s time for bed, look for Louie to be curled up and sleeping with his brothers.”