While Victoria has owned several cats in her life, she was drawn to Merlin (originally named Vladimir) for a variety of reasons.

“I specifically wanted a black cat,” she says, “because I had one growing up and think they’re the sweetest. I also feel passionate about the fact that they’re less likely to be adopted. I fell in love with Merlin the moment I met him, but I was absolutely sold when I learned he was the last of his litter to be adopted. My dog, Skipper, who was about to become his new ‘sister’, was also the last of her litter to be adopted. And so I thought — if I’d been so lucky with her, this had to be a sign!

“Merlin has been an absolutely joyous addition to our lives. He took to our household immediately, and I felt he truly trusted me in his new environment. Not only that, but he’s proven to be an energetic playmate, a warm cuddle buddy, and a constant source of laughter. 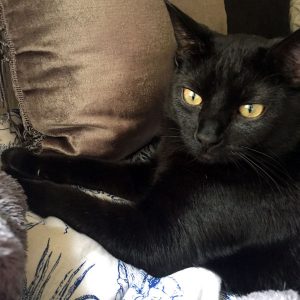 “Merlin LOVES playing with Skipper, chasing after his light-up ball, hiding in boxes, and watching the world go by from the window. He’s always trying to finish off my plate of food or drink out of my water glass, and he ‘works off’ the snacks he sneaks by running around a lot (his favorite time is, of course, the middle of the night). Because he’s always in the mood to play, down time with lots of cuddling is always appreciated and cherished.

“Although he’s extremely independent, he does make some ‘lap time’ a daily ritual, and eagerly accepts affection and pets from everyone who visits. A true mischief maker, he keeps me amused by showing up in random corners of the house, playing hide and seek under the blankets, and trying to play with the bathtub plug while the shower is on.

“Then, despite the constant chaos of our lives, at the end of the day, the three of us pile into bed together and have the cuddliest, coziest dreams.”