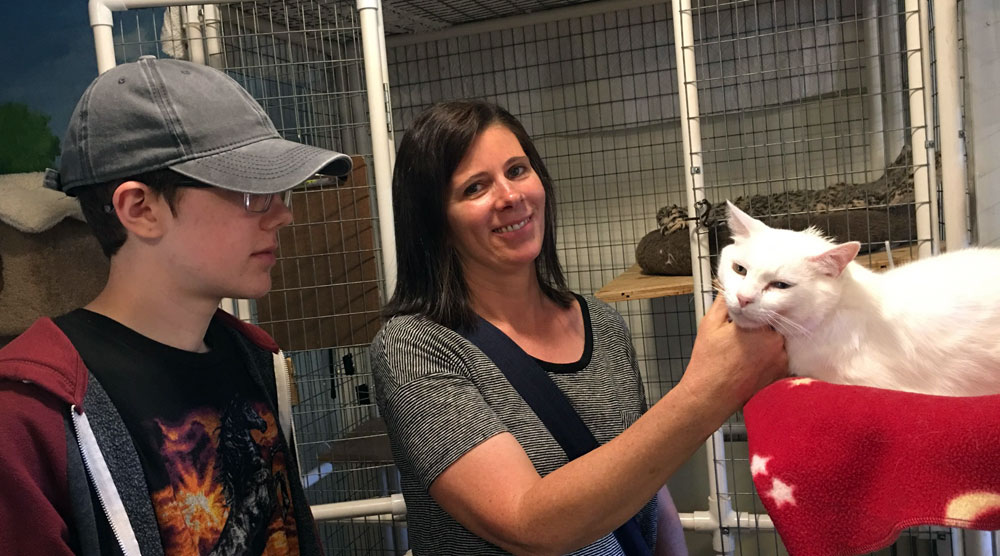 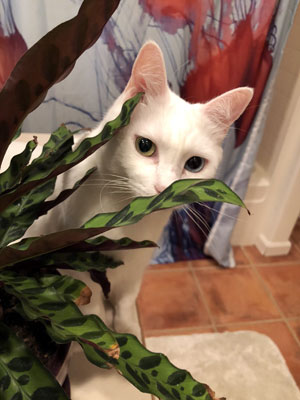 “Our family adopted Nova (we’re still trying to find a new name that suits him) in June,” explains Vicki, “but the first time we saw him was June 2017 at the Vancouver Recycled Arts Festival.

“My husband and I wandered over to the Furry Friends booth and were instantly drawn to the white cat with one blue eye and one green eye, and the tilted head! According to his bio, he had just undergone a procedure and had had such a terrible reaction to the anesthetic that it left him with a head tilt that was probably permanent. We thought he was adorable — especially the different colored eyes. We stood there for quite a while wondering if we could possibly adopt him. Our other cat would have hated it, so we had to pass. But we didn’t forget him, and talked about him a few times throughout the year.

“Sadly, our amazing kitty had to be put down in May after an illness, leaving a large ‘cat-shaped’ hole in our lives, and our family was very unhappy. Although I had plans to eventually find another cat, I wasn’t sure when that would happen. I’ve had cats my whole life, and couldn’t imagine our home without at least one. For me, they’re a necessity!

“When the 2018 Vancouver Recycled Arts Festival rolled around, we remembered the Furry Friends booth and decided to see if any of their cats would be a good fit for us. As we walked around the tables, my husband and son noticed a white cat with a tilted head, and after reading his bio, we were shocked that it was Nova! We couldn’t believe that in an entire year, no one had wanted him. 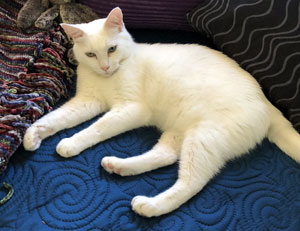 “Apparently he had developed a urinary tract condition that required him to be on Rx food for the rest of his life. I assumed this was part of the reason no one had adopted him. But since I’ve known other cats with the same issue, it’s not really a big deal, so it certainly wasn’t a problem for us. We went home, filled out the adoption paperwork, and received a call from Jennifer that night to set up an in-person meeting. A few days later, we brought Nova home!

“Fast forward a few months. Nova has fully settled into his new life. He had some crabby days at first, but he’s completely at home now. He’s extremely friendly, ‘insists’ on being involved in every activity around him, and is the most toy-oriented cat I’ve ever owned. Furry Friends sent along his crinkly tunnel, and he spends a good part of the day with his head sticking out of one end waiting for someone to walk by so that he can dash through it and mock-attack them. He also likes water and sits on the bathroom counter waiting for the faucet to go on so that he can get a drink. 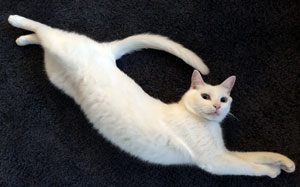 “Being extremely chatty, he meows nearly all the time, but fortunately his meow is more of a quiet, growly/rumbling sound. For a slightly older cat (he’s five or six), he’s really quite lively and spends less time napping than the average cat. Nova is very happy here! He has large windows to look out of, lots of company and plenty of attention. I’m sad to think he spent so long without a home, but I’m glad he was still available when we went looking for a new cat family member.

“Thanks to Furry Friends for the great work you do on behalf of the cats!”