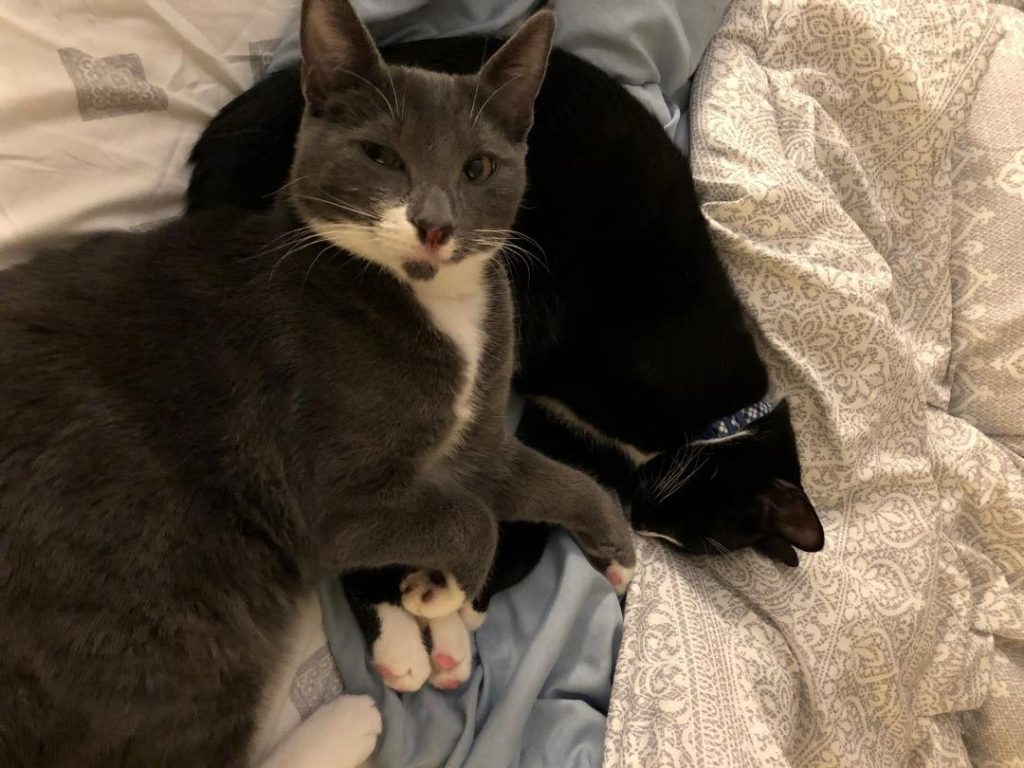 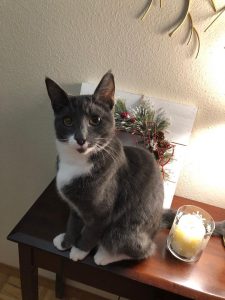 “Oliver is our third cat,” says Carolyn, “and after adopting him, we changed his name from Allegro to Oliver. It was LOVE at first sight. He actually looked very similar to our dear Oscar who we lost almost two years ago. Oliver had the cute little ear tips Oscar had, and I’ve always loved this in cats. Then his cute little eyes and face. He had an adorable little growl while playing with his toy with us. And he was such a cuddler.

“He adjusted really well to living with us. We set up an area that was his space for the first few weeks and then slowly introduced him to his big sister, Zoe, and brother, Chester. Now it’s as if they’ve been around each other their whole lives, and they all sleep together.

“Oh, Oliver! He’s our lover. I’ve never met a cat like him. He’s one of the sweetest, most loving lap cats. He loves to be touched, petted, brushed and cuddled. And he has the sweetest purr. It sounds like a heartbeat. He also likes being held like a baby and really doesn’t care how he’s held as long as he’s in someone’s arms. He’s a very curious kitty, but he’s also very clumsy. We have to watch him like a hawk because he’s always getting into things or getting hurt. It’s like having a toddler around. 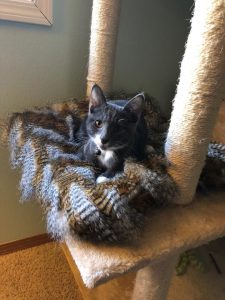 “Besides the other two cats, we have two dogs, and Oliver gets along with all of them. He’s extremely energetic and since he has so many people and animals to play with, he’s never bored. He loves these fish wands with bells and a feather on them, and he RUNS to you when he hears this toy. It doesn’t matter if he’s asleep or across the house, once he hears this toy he’s ready to play. He also drags them all over the house. You hear this jingle, jingle and a growl — so no one else can touch them! I’ll find them on my bed because he thinks he’s killed them and wants to show off his prizes. He also likes string toys and balls, and will even play fetch with you.

“He’s quite the character, too. He grumbles when he walks towards you if you’ve been gone all day – as though he’s scolding you. He loves to lie under the covers, sighs when he’s about to fall asleep, and snuggles up to you all night. He also manages to get his collar off. I’m not sure how he does it, but we’ve lost so many collars in our house.
“At the end of the day, what can I say other than we’re so happy to have this little guy in our family. We all love him so much that I couldn’t imagine life without him.” 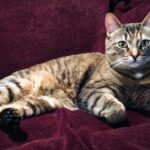