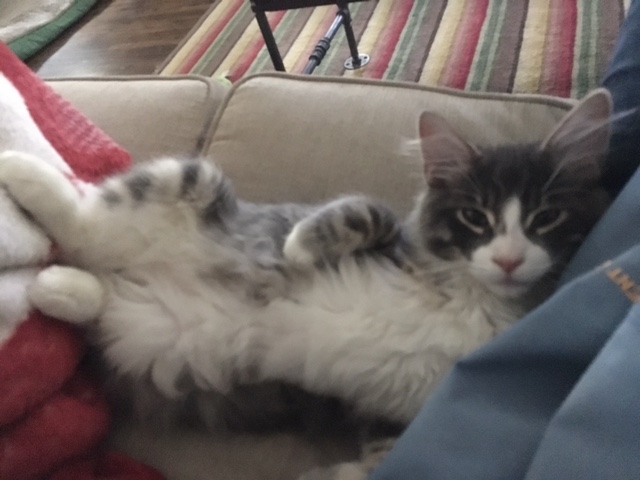 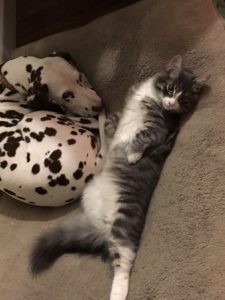 “He may not be our first kitty,” says Trista, “but he IS one of a kind. Originally called Indy, we changed his name to Pickles — Pickles Indiana Mills.

“We were looking for a kitten who would adapt well to our home. Thanks to his wonderful foster mom, Pickles and his littermates grew up around dogs and cats and were well socialized with new people with plenty of hands-on touching. When we visited the kittens, I preferred Irwin, but once we learned about each of their personalities, I knew Pickles was the one for us — laid back yet curious, and always the first to investigate new places.

“Pickles has become a true companion not only to us but to our dog, Lycan. They sleep together, play together and eat together. He’s a major cuddle bug and wherever we are, he’s there too. If we leave one room and go into another, he just has to follow us in case he misses out on something

“He bonded with us in one day, and by the end of the week he felt comfortable enough to touch noses with Lycan. As for our other cat, Soda, it took a month for her to accept that Pickles wasn’t just a guest! Today, he acts like Soda’s annoying little brother, one she simply tolerates because she prefers her own space, which is fine with Pickles since he prefers wrestling with the dog. He also likes chasing the laser pointer and playing with toy mice, and while he’s not really a great fan of treats, he likes hugging and biting his catnip-stuffed pickle.

“He wakes up when I get ready for work and cuddles with me on the couch during our morning routine. Then I leave for the day and he naps until my husband 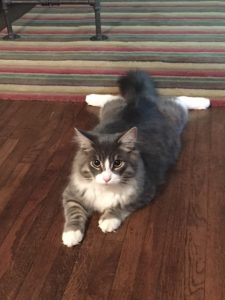 gets up, and he gets cuddles all over again. In fact, he’s such a HUGE cuddle monster that he starts drooling with happiness!

“A true character, when he’s pooped from all his playing, he lies spread-eagled on the hardwood floor, and when his belly’s full, he passes out on his back, exposing his fluffy belly.

“At night, he sleeps where he wants — on the bed with us, under the blankets, on the couch or next to Lycan. Pickles rules our house and we are so okay with that!”