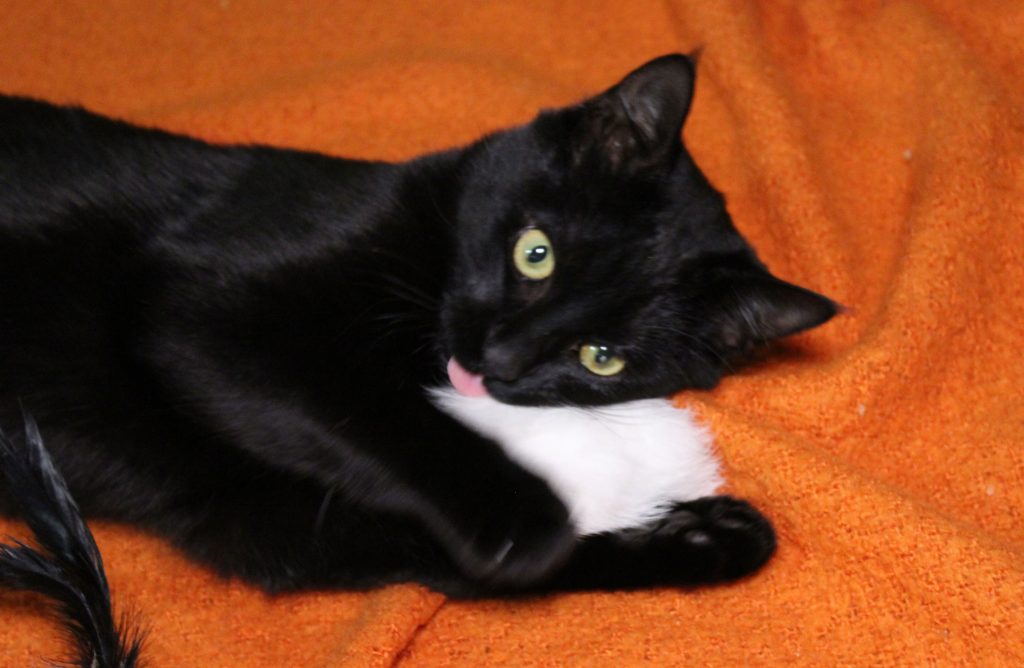 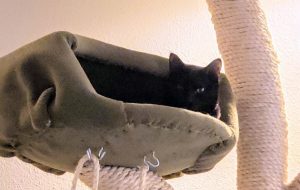 “My boss at work is Jaimie Garver, your new president,” Helen says, “and I got to know Furry Friends through her. When seven-month-old Ravenpaw came into the shelter, she posted on her Facebook page a fundraiser for his vet bills with videos of him bravely trying to pull himself around on his front paws, while having two seriously broken back legs. He must have been in a lot of pain, but he still wanted to play!

“His brave spirit touched my heart and I started pestering Jaimie for more videos and updates on his status. I know that black cats are harder to adopt and that he might have special needs after the surgery to repair his broken legs. So I signed up to adopt him before he was even put on the Adoption page. I had to wait until he got his clearance from the vet once his legs had healed and he had gotten all of his shots.

“While I was waiting, I had our handyman build a catio on our back porch to allow the cat door to open onto it since I knew little Rayray would have to be an indoor cat. Although our outdoor cats had to get used to the porch being closed in, our other three cats went in and out the front door and 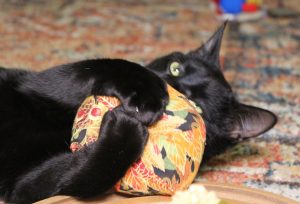 actually began staying inside more because of it.

“Many thanks to volunteer Sue Anderson for fostering Ravenpaw while he recuperated in a cage. I finally adopted him on January 6th, 2020. I think Sue fell in love with him too. She said that if things didn’t work out, she would be first in line to adopt him.

“The drive from the Vancouver shelter to my Dallas home took 1 ½ hours, but Ravenpaw was as silent as a church mouse – he didn’t let out a single peep. I kept him in our bedroom for several days to allow him to get acclimated while our three indoor cats got used to his smell. I did scent swapping with their blankets to help them get used to each other. 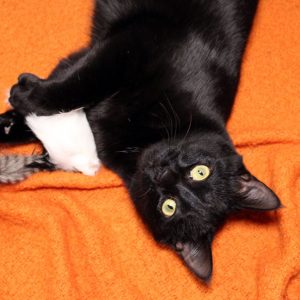 “After three or four days, I placed Rayray in an enclosed cat playpen in the living room where he would be safe from the other cats. All three came out and smelled him, and there was no hissing or growling or raised fur. After he had been there awhile, I let him out in the living room. All of them touched noses and smelled butts with no ill effects, so we started letting them share the same space. Our other two males didn’t mind Ravenpaw at all, but our one female, Augie, was very jealous of his getting my attention and playing with her toys.

“She pounced on him, chased him and batted him, but without any raised fur, hissing or sheathed claws. On the advice of the Furry Friends cat behaviorist, I began brushing all four of the cats each day with the same baby brush. I also started playing with Augie and Rayray at the same time with separate toys. And slowly but surely, it worked. One evening, when I sat on the living room couch with my feet up to watch TV, Rayray got in my lap and Augie sat between my calves. She then touched noses with him, smelled him and licked his tail and his head.

“Rayray is a real character! He’s the sweetest, most loving little creature you could ever want — not a mean bone in his body. He’s crazy about human food and thinks that if we eat, it must be time for him to eat. He doesn’t really want our food; he just wants to eat with us. When he’s not napping or eating, he’s playing. He loves our 7-foot tall indoor cat tree and I think climbing it has helped strengthen his healing muscles. He also loves the catio and goes out there all the time, as do our other three cats.

“We just love Ravenpaw to pieces. I’m so glad we adopted him!”