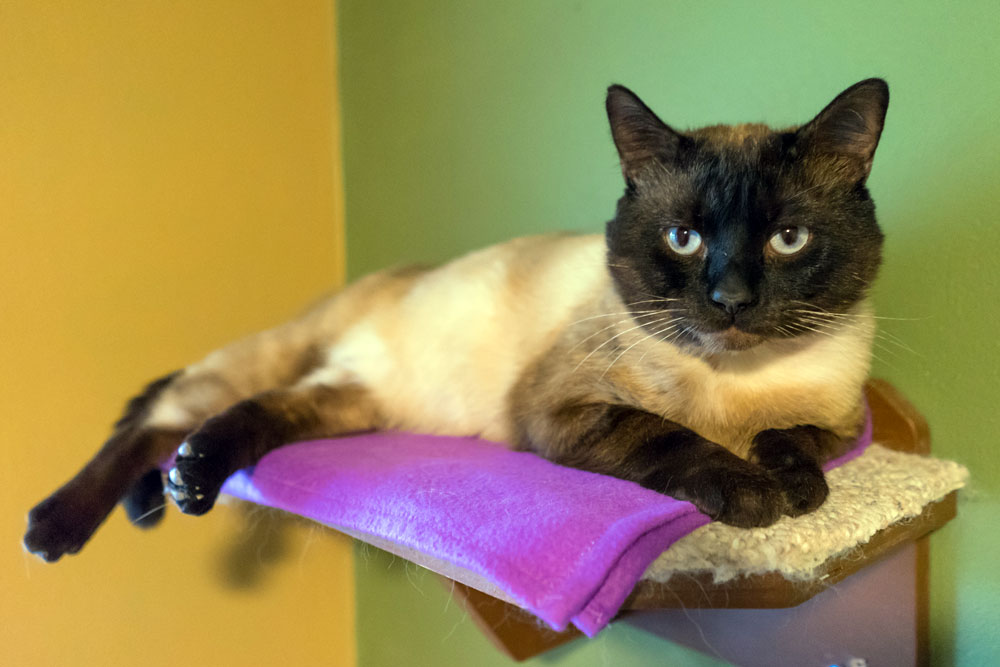 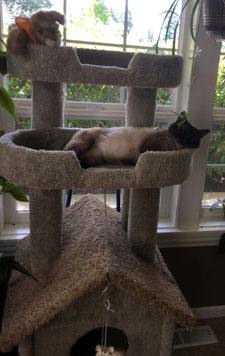 “Teal’c (formerly Truffles), named after a warrior in one of our favorite sci-fi series, has been a good addition to our family,” says Clayre. “And while we have another Siamese mix named Tiger Lily, they’re not ‘besties’, nor did we expect them to be.

“After seeing him posted on the Furry Friends web site, I was excited to meet him since I’d always wanted a chocolate Siamese. Diane, however, persuaded me to wait awhile as he’d been on his own for most of his two years, was something of a biter, and still needed to learn some manners. When I did finally meet him, he walked over to me, and although I said hello, I didn’t touch him. Then, to my surprise – and delight — he jumped up in my lap and started purring. It was a match!

“We brought him home a few days later and put him in a room where he could acclimate himself to us without other distractions. Although he was still biting, if we said ‘no’ sternly and didn’t touch him, he wouldn’t do it again during that visit. If he did, we’d leave the room.

“Our next step was introducing him to Lily through a baby gate so that they could check each other out. She didn’t seem to mind him so we let them meet face to face. She hissed and he backed off. But not for long. He liked chasing her so much that, being the ‘skitty kitty’ she is, Lily ended up living under our couch. Since she’d been living under our bed even before we adopted Teal’c, we decided to give her a room of her own. Now they can view one another from the safety of distance!

“We’re still working on his manners, but he’s a joy in our lives because he’s so playful and so enjoys chasing things. We’ve nicknamed him Teal’c, the Thunder Cat, 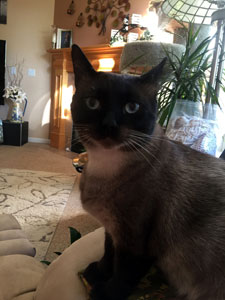 since he loves to run up the stairs, then turn around and storm back down, run across the hardwood floors into the great room where his cat tree is, and up he goes like he’s being chased. He also likes chasing his tail — especially under the coffee table – while his favorite toys include a stick with a bird swinging from it, small balls of yarn, toy mice and a toy grasshopper.

“He’s almost like a dog in that he runs to the door to greet me when I come home from work. Then he follows me around the house and is either at my feet or rubbing against me whenever I sit down. My husband, on the other hand, works from home and Teal’c loves to sit in his lap while he’s at the computer. They’ve become fast friends, with Teal’c lying in my husband’s lap when he reads or watches TV.

“He also likes to cuddle and to lie at our feet or the chair next to us when we’re eating. But what he likes most is lying between us when we first get into bed at night, and if we’re reading – thereby ignoring him – he’ll climb over whatever we’re reading to get our attention. Then, once we’ve satisfied his cuddle needs, he runs off for the rest of the night.

“Needless to say, we are very, very happy to have him in our family.”