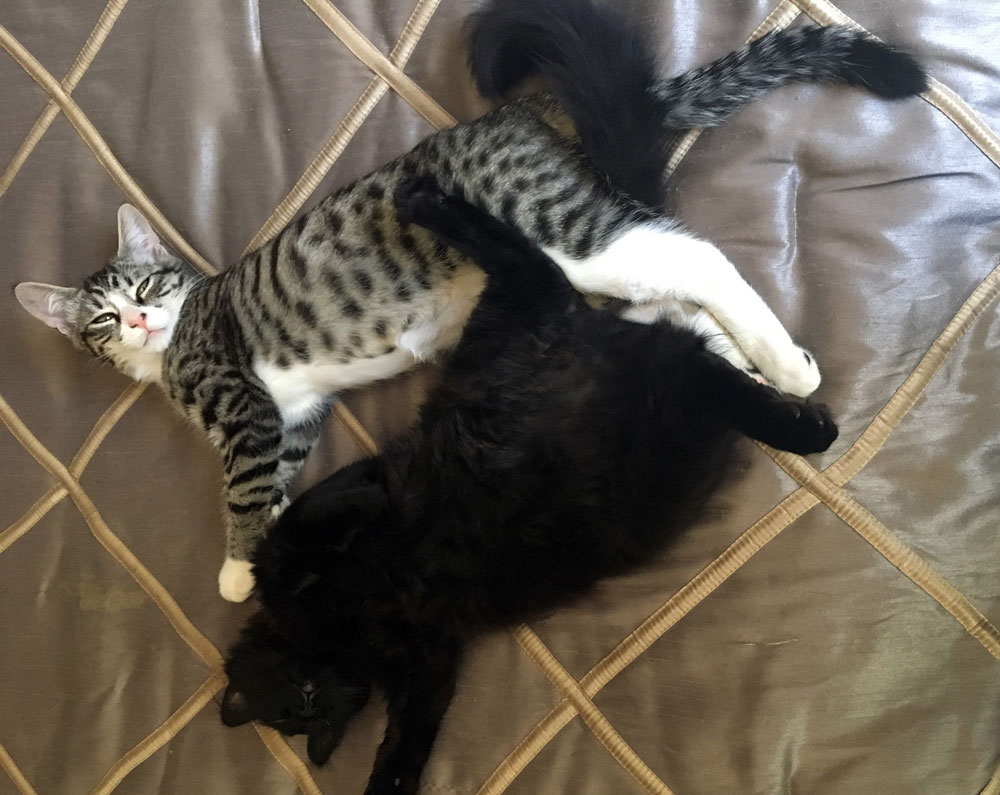 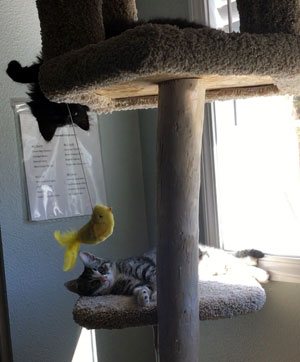 “Where do I begin?” asks Stephanie. “It’s an examination of a kitten’s daily life and the unquantifiable joy each brings us. And yet I’m convinced that whatever cat paradise awaits the two new additions to our family, we are the lucky ones.

“Una (formerly Daisy) the tabby, and Lada (formerly Delilah), the black DLH, arrived to suspicious and aloof hesitation on the part of our slightly older female tabbies, Gyda and EDI. But the growls of warning, hissing and occasional pops on the head to correct their youthful insolence had little effect other than a respectful, submissive lay-down.

“The babies were curious, with everything targets for inspection, and nearly two months later, they’ve assimilated beautifully. The ‘big girls’ no longer growl and run away in righteous indignation, and even join in when the kittens begin their feline ‘blitzkrieg’, racing from one end of the house to the other for no particular reason.

“There’s something wonderful about a kitten’s busy day, and we spend most of it smiling, taking pictures and shaking our heads. It begins with wrestling matches on the carpet, writhing and angling for position to strike. After a while, the running takes over, and it amazes us that so much thunder and noise can be generated by two such tiny creatures. 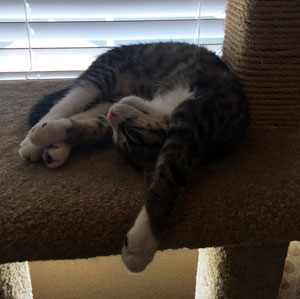 “They pause to eat, making for inevitably sleepy eyes and fat tummies, and when sleep claims them, they go down hard for industrial strength naps. Body position or relative comfort is irrelevant – there’s no sleep like the sleep of tuckered out kittens. We look at them and see perfect examples of innocence, but after awhile, they wake, and we take the opportunity to snuggle and smooch with them. They purr at the slightest provocation, and there’s no better stress reliever than holding a purring kitten. Soon, a toy here or a paper ball there — something catches their attention and they’re off …

“They race and jump and flop around in mad abandon because their imaginations are in overdrive. This is what kittens do: it’s their job. They hop sideways at each other with pinned back ears and narrowed eyes, tails fluffed and curved like a monkey’s. They turn somersaults for no reason; they grab at anything nearby for no reason. Kittens under the spell of playtime are engines of excitement and we laugh and delight in the show.

“At night, they find their places and settle in – relatively speaking — but the racetrack across our bed is still open for business. We watch them as we’ve watched all the kittens we’ve ever had and the experience is every bit as wonderful and rewarding. We know our kittens (and the ‘big girls’) are precisely where they should be: adored, safe and healthy in our house. 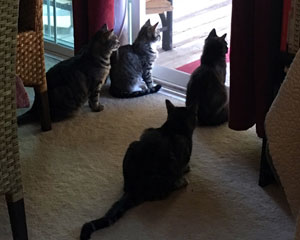 “We may be sentimental about cats, spending money to care for them as we would any human, then we think of those who don’t. By that measure, given the choice of being cat people or not, the decision was made long ago. There’s nothing like a new kitten in the house … except maybe two kittens!”