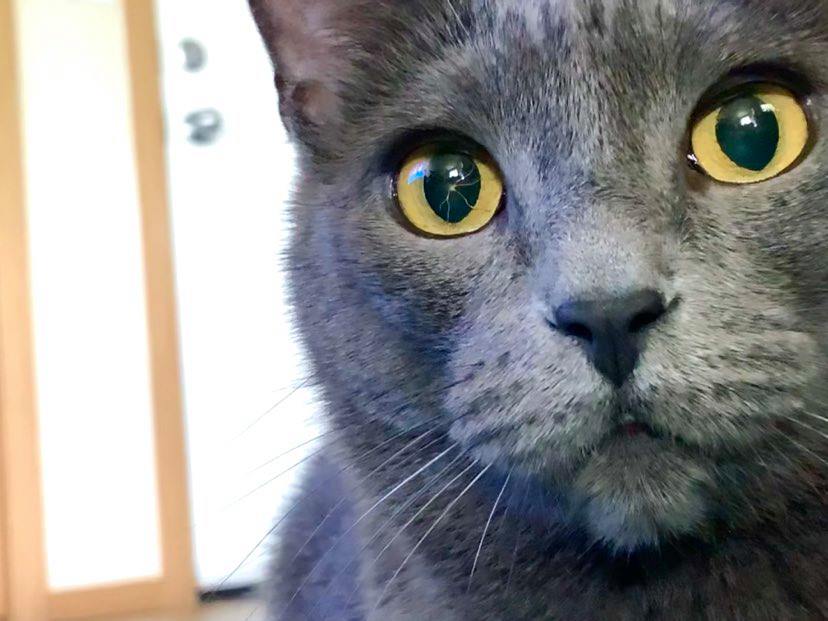 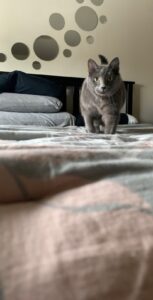 “I’ve always lived with cats,” says Sarah, “but Vicky is the first cat I’ve adopted with my boyfriend. Although her name was originally Gracie, we changed it to Vicky aka Thick Vick because she’s a big girl (20 pounds when adopted but 16 pounds now).

“My last adopted cat was 15 years old when he died and I was heartbroken from that loss. We decided I needed another cat and Vicky was so different from him, but still a bit older (7 years old) and my favorite blue/gray color. Despite being incredibly overweight, she was SO spunky and engaging. She had a big attitude and a tiny chirping meow. I usually prefer male cats due to their more relaxed personalities, but I decided it was time for a change.

“Her adjustment was gradual. She would briefly spend time with us each night but she was very skittish when it came to sudden movements and loud noises, including cars driving by when the windows were open. Within two weeks, she seemed to warm up, and as she got more comfortable, she continued to reveal new aspects of her personality.

“While my previous cat was a ‘mama’s boy’, Vicky’s independent streak has been a change of pace, yet it’s a nice fit because she’s always close by. She provides us with hours of entertainment due to her high energy and desire to play. She also enjoys spending time with my partner — something he also enjoys although he pretends he doesn’t! 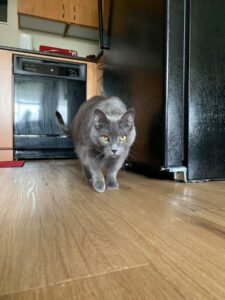 “Since Vicky loves to play, we have various mice and ball toys scattered all over the floor, but she particularly loves a red fluff ball that she often carries in her mouth (when it’s not lost under furniture). She also loves playing with the laser and feathers on a stick. She’s very feisty and is always ready to attack things that move — in a playful way – including us. She’ll attack our arms and hands if we move them quickly across the couch or a blanket.

“A big favorite is our game of hide and chase. I chase her into a room, she collapses onto the floor and I rub her belly, then run out of the room and hide. She runs around until she finds me and the game repeats itself until we’re both tired! Despite her diet, she’s still incredibly chubby, and while it doesn’t impede her agility, she definitely gets out of breath and is quite a heavy breather. Occasionally we’ll hear her breathing, but not see her, and realize she’s resting somewhere close by.

“Vicky prefers being petted and cuddled on her own terms. She often cuddles in the late evenings right before bed and will lie in my lap or lie next to me while I work in the middle of the night.

“As for resting and sleeping, she has numerous choices – from one of her many cardboard scratching posts to the floor under our bed to her cat bed in the living room near us to the couch beside us.” 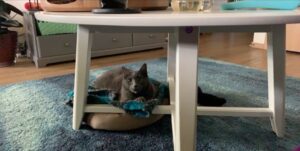