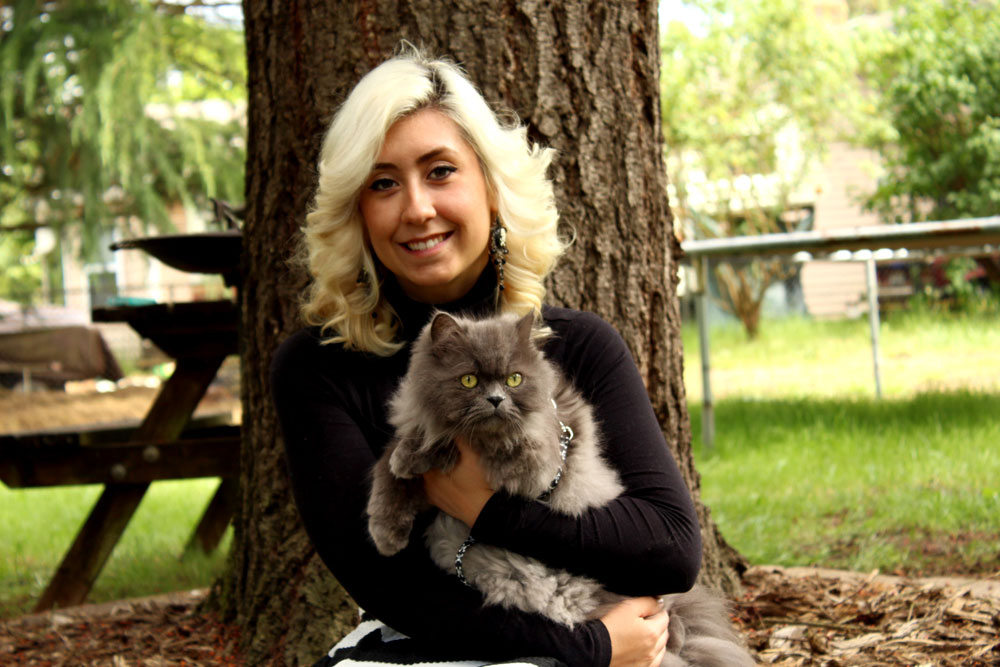 Griffin is a 2 year old blue Persian rescue cat from Vancouver. He was rescued by Furry Friends Cat rescue and he is out to change everyone’s preconception about cats. His personal motto is “anything dogs can do, I can do better!”

In March of 2015 I  unexpectedly lost my kitty of 18 years, Fluffy, to an unknown cause. I got him at 4 years old when my brother “rescued” him from a tree top as a kitten. Heartbroken and lonely without the companionship of a furry friend like I was used to I couldn’t go another day by myself and quickly began the search for a new cat to adopt. Thankfully being a volunteer for Furry Friends I had an unlimited supply to choose from, but after several adoption attempts fell through for various reasons I was feeling very discouraged. One day Lunda our adoption coordinator emailed me about a new young cat coming in that I needed to see and which, at the time, she thought was going to be a maincoon, like my Fluffy. The moment I saw him I knew it was meant to be! I don’t know much about where he came from but his name was Jango, he was barely 7 lbs, was covered in fleas, had horrible ear mites, had sores on his head from scratching himself so much and his fur was so horribly matted that when he tried to walk it would pull his skin causing it to bleed. Despite being in such bad shape and it being his first day in a scary new place he melted right into my arms and never stopped purring, and that was that I had met the boy for me. After some tearful begging to my parents they agreed to his adoption. Jango got renamed as Griffin, got a few rounds of flea and ear mite treatment as well as his mats shaved off and was ready to come home.

Right away we would tell he was no ordinary cat, but much more like a person in a little cat body. Today he has filled out to a healthy 11lbs 7oz and sports a lion cut in the summer to keep his dense fur coat, which reaches+7 inches in the winter, under control. Griffin turns heads everywhere he goes whether he is walking on his leash or riding in his stroller or car seat. He walks around the pet stores when we are shopping for his food, attends pet shows and expos in his stroller and loves to go “bye bye” anywhere in the car, especially if he gets to drive. People always ask “what kind of dogs is that?!” because he looks different than your typical cat and because they can’t believe a cat would be so calm on a leash in public, especially around big dogs. Griffin has no fear, big dogs don’t scare him and he is extremely friendly so he will often approach the big dogs and people for a sniff! His personality and outgoing behavior came naturally for him, I never had to train him to use the leash or to be comfortable in public with a lot of people and animals, he’s just a natural and he loves the attention. I just tell people “I hit the jackpot!” He loves to play hide and seek and enjoys jumping out from behind doors to scare everyone, including our dog who doesn’t find it as funny! He also likes to “fetch” pine cones in the yard, munching on tortilla chips, laying in his window hammock, doesn’t mind (too much) me putting him in funny t-shirt and his best friend is Murphy, a Siamese kitty adopted from furry friends by my brother.

With Griffins outgoing and fearless personality he was just meant to be a therapy animal so once a month he visits a local retirement community. His unique look and sweetness lights up the faces of the elderly residents and they always get a good laugh from getting a high five from him in exchange for a treat or whatever his latest little outfit it. He also has a face book and intsagram account (@CallMeGriffy) where I occasionally share my favorite pictures and videos of him. Griffin has a unique and adorable appearance and a special personality which I always try to use to promote awareness for rescue cats and to always adopt, not shop! There are so many wonderful ,beautiful and healthy cats waiting in shelters for someone to love them, Griffin is proof that you don’t have to buy from a breeder or pet store to get the perfect persian cat! I had always wanted a persian growing up and I am thankful I chose to adopt, had I not, I would have missed out on the opportunity to rescue my perfect, one of a kind boy! When Furry Friends rescued Griffin, he also rescued me. He was exactly what I needed and he has been a priceless addition to our family, he brings so much joy to us and everyone he meets!