Have you met Jaimie Garver? If not, chances are you will if you drop by the Halfway House even occasionally. This powerhouse, despite having only been a volunteer for less than two years, has taken on the demanding position of Furry Friends president. What’s more, she’s not just president, but is currently lead of park events, the grant team, the fundraising team, medical team, and Halfway House coordinator. That’s a mouthful to say and even more to do. So, how did she get to dedicating so many hours a week to Furry Friends? 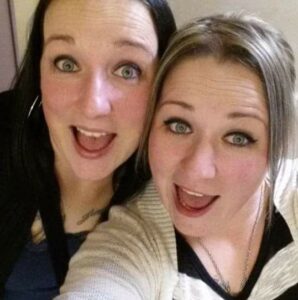 Well, like a lot of us, it started with Google. With a search, she decided to sign up for a Wednesday and Sunday shift that she continues to work today. She wasn’t scared away by the kitty-litter scoop initiation and the following July she was voted on the board to take over the park events and be a member of the grant team. According to Jaimie, she decided to make the jump to President because she likes to help out in any way she can. “When I found out the President position was coming open, I knew that it was the right role for me,” Jaimie explained.   And what a role it is! From constantly moving the cats around to make sure each and every one is in the best possible place possible depending on their temperament to ensuing that Amazon deliveries don’t take over the Halfway House’s front table, she makes sure that cat, house, and volunteers are running smoothly and working together. Her goals as President include getting to know all of the volunteers, educating the community on cat care and our organization, and making sure that Furry Friends is sustainable for many, many years to come. 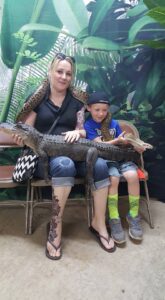 Of course, Jaimie is no stranger to being busy or having lots of responsibility. In addition to being a wife to her high school sweetheart and mother of one son, Tom, she is the Chief Executive Officer for a credit union called Portland Local 8 Federal Credit Union. “I’ve been in the banking world for 19 years”, Jaimie says, which amounts to half her life this year. She also volunteers for a handful of groups, including roles with the Labors Community Service Agency to provides Christmas to union and community members, Share House of Vancouver, Habitat for Humanity, and a new 501 c 5 company called Labor Littles seeking to bridge the gap between building trades and childcare. “Volunteering is very important to me and I do it every chance I can get,” she explains. This year alone Jaimie has clocked many, many, many volunteer hours.

It can be hard to imagine doing so much, much less doing much of it without pay. However, beyond knowing that she is making a difference in other’s lives, her favorite part about volunteering is when she can inspire others to do the same. “A lot of people want to do more,” Jaimie points out. “They just don’t know where to start”. She wants to raise her son with the values of volunteer work, so she encourages him to join her. Perhaps you’ll meet him, helping shoo away kitties from wet food so the ones who really need it can eat in peace.

It’s apparent whenever you talk to Jaimie that she loves what she does. Not many people would dare juggling all the demands and tasks of being a leader for Furry Friends, but Jaimie does it with such skill that it would put a circus clown to shame. Has it been mentioned that she has nine cats and dogs? However, for a volunteer at Furry Friends, it isn’t just about all the tasks you do. It’s about the cats. So, we shall end with Jaimie’s proudest moment as a volunteer: when she saw Baby Girl get adopted. Be honest with yourself: did Baby Girl intimidate you a bit? Another question: would you ever consider trying to give her medicine? Well, Jaimie was determined to get through to the beautiful gray princess and after a full year her efforts began to pay off. It took twelve months for Baby Girl to trust Jaimie, but she eventually allowed her to pick her up and even be kissed on the head. When Sam, Jaimie’s niece was interested in adopting her, she came to the Halfway House three times a week for months to bond with her before taking her home. Since Sam lives in Tacoma, Jaimie drove Baby Girl all the way up there to make sure she did okay on the car ride and felt secure. According to Jaimie, the moment Baby Girl got into the house she claimed it as her own. “She’s shown zero signs of aggression and follows Sam around like a dog,” Jaimie says. She even wears cat clothes now: something unimaginable in the first months Baby Girl (At that point, Mushka) was at the Halfway House. “This is a great example of the work that Furry Friends does by ensuring the cats are getting not just into homes, but into the right homes,” Jaimie explains. “I love to be a part of that!”

Oh, and one last thing. Jaimie wants every Furry Friend volunteer to know this:

“I love Furry Friends and I love where it came from. I plan on being a volunteer for a very long time and I look forward to the impact we can all make working together towards the same goal. Helping cats and educating the community we serve”.