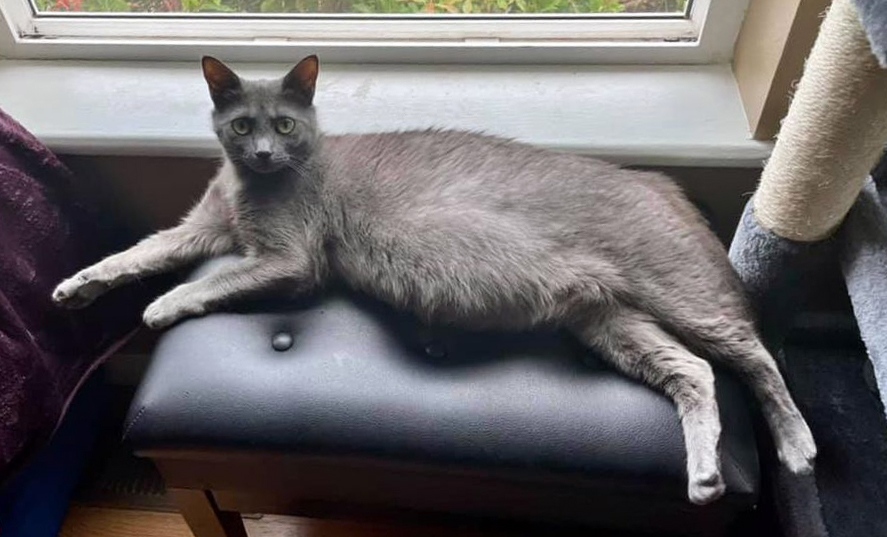 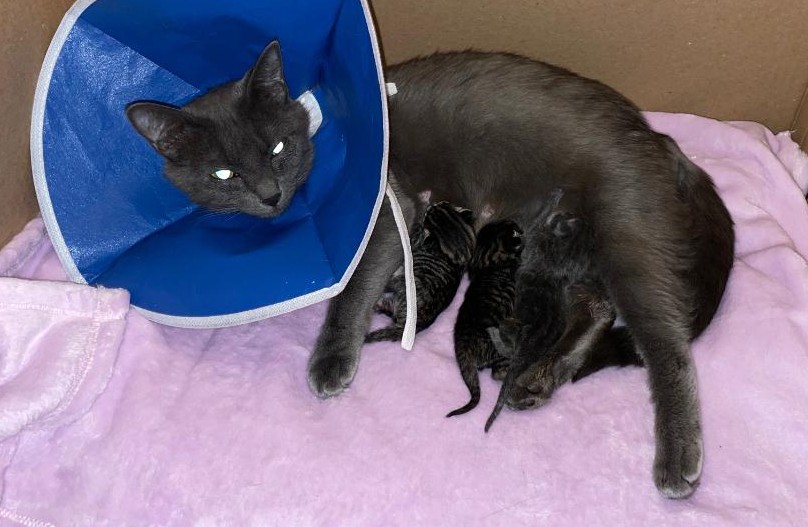 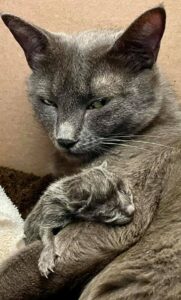 It started out as a typical story for Furry Friends, a cat rescue in Vancouver, Washington. We received a call that there was a pretty grey mom cat that had seven kittens. We took the mom and babies in and they went to Veronica and Sam Roderick’s home for foster care. They named the mom cat Vaneesha. The couple cared for the babies making sure they were growing up healthy and happy so they could be adopted out. Veronica soon found out that Vaneesha was pregnant again. How could this be? The cat was not allowed to go outside while in her care. It turns out that cats can become pregnant while they are still nursing a litter. When we took Vaneesha in she was already pregnant. So Vaneesha was growing and getting ready to give birth to the next litter but there was a problem.

As she was giving birth to her three new babies there was an obvious problem. Veronica contacted Furry Friends Medical Director Kensie Broom and was directed to take Vaneesha to a pet hospital in Portland, OR. Well that was a 2 hour drive for Veronica and the kitty. Then there was an eight hour wait at the emergency room before Vaneesha could be seen. 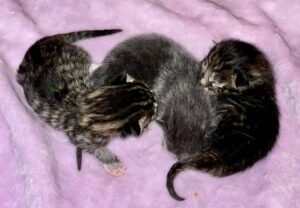 It turns out that momma kitty had a uterine prolapse which was fixed with some stitches to hold it in while she heals. But she has to wear a soft cone around her neck which makes everything hard, especially cleaning her three newborn kittens. She also is having trouble feeding the babies, so super fosters Veronica and Sam are tasked to take care of the kittens potty needs after each bottle feeding which is approximately every 2 hours, around the clock…so, no rest for the wicked.

There is still the seven kittens from the original litter to take care of all the while trying to spend as much time as possible with mamma and the three new babies. The original seven are at adoption age and they are full of life jumping and playing. They are a handful. 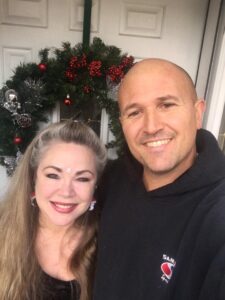 About Veronica and Sam

Veronica and Sam have been foster parents for Furry Friends for nine years. They have taken care of 11 mama cats and 62 kittens in that time and have accepted some of the more difficult challenges. This comes out to 14 litters which three litters were abandoned kittens between 4 to 5 weeks old;  two mama kitties with babies (one litter was four weeks old and the other one was six weeks old);  and nine pregnant mama kitties of which have given birth to 45 kittens.

As you can see in this story, Veronica and Sam have gone above and beyond the call of duty. They have sacrificed their time, skills and emotions to make sure that the kitties in their care have the best shot at a happy life. They are volunteers and the only reward they get is the satisfaction of knowing that they have made a difference in the lives of these little furry beings.

Many of the Furry Friends volunteers and foster parents go above and beyond the call of duty to make sure the cats in our care have the best care possible. We are passionate about the cats and go to extraordinary lengths to make sure they are healthy, happy and well socialized before they are adopted out into their forever home.

Furry Friends is a 501(c)(3) nonprofit no-kill cat rescue serving Clark County, Washington and adjacent counties. Founded in 1999, we are a volunteer run organization that saves and adopts out homeless, relinquished and abused cats.

Furry Friends is a 501(c)(3) nonprofit no-kill cat rescue serving Clark County, Washington and  adjacent counties. Founded in 1999, we are a volunteer run organization that rescues and adopts out homeless, relinquished, and abused cats. We shelter and care for them as long as it takes to find them forever homes. We provide medical exams, medications, spay/neuter, food, and litter for up to 400 cats each year.