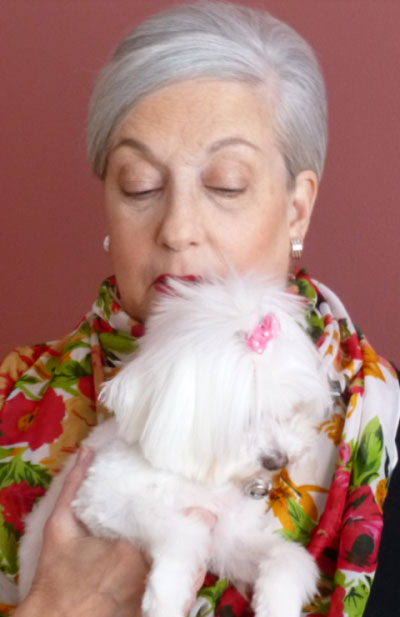 You may know Nomi from the Cat Tale stories and the Furry Friends Fur-Ever stories she does for us. However there is much more to this lady. See what she has to say about herself.

I was born, quite literally, with a pen in my hand. Words are my passion and were my profession. A Journalism graduate from the American University in Washington, D.C., I had, over the years, been a poet and best selling author, an advertising copywriter and PR director of a major hospital, a contributor to scores of journals and a public speaker on teen mental health issues.

As a child growing up in an extremely allergic household, we never had pets. As a woman with a highly successful career and an active social and cultural life, having a pet never crossed my mind – particularly after developing severe asthma to cats in my twenties! Then I tumbled head over paws for a rowdy Jack Russell terrier named Uggie in the 2011 Academy Award winning film “The Artist.” Don’t ask me why. Writers have no logical explanation for their obsessions, and Uggie, a rescue dog, became mine.

Suffering from fibromyalgia and severe spinal problems that had left me increasingly housebound, isolated and unproductive, I found myself fascinated by and envious of the unbreakable bond of loyalty and love that Uggie shared with his onscreen owner. It wasn’t long before I took my obsession, born of that envy, one step farther, surprising myself and everyone I knew by taking a huge leap of faith and adopting my own rescue dog – a petite 5.5 pound (hypo-allergenic) Maltese named Mini!

Within days of prancing, into my life, she redefined my life, and by week’s end, she became my life. Snuggling her small, velvety soft body dulled my pain, soothed me, and granted me some measure of peace, while her sweet presence filled the entirety of my apartment and provided me with constant, rare and reassuring company. I was stunned by the depth of my love for her. It was a love unlike any I had ever felt before. Fierce and protective. Exquisite and unconditional.

If not for Mini – and Uggie – I doubt I would have immersed myself in the world of animal rescue. But with my passion for words undimmed, I decided to volunteer my writer’s voice to anyone needing it. Thanks to the various guides and directories I discovered online, I began systematically emailing hundreds of query letters to DOG rescue organizations (as if the mere sight of a cat would trigger my asthma!) in Canada and the U.S. To my supreme delight, I found that many of the groups I approached not only needed but enthusiastically embraced my voice.

Thanks to cyberspace, I immediately became part of a world where tragedies were balanced by triumphs, and where the passion of volunteers was to save the lives of innocent dogs – the ailing, abused and abandoned, surrenders and seniors. Where empathy and selflessness, commitment and devotion knew no bounds. Where “giving up” and “giving in” weren’t verbs in anyone’s vocabulary.

As a professional, I was able to relieve these dedicated volunteers of the burden of writing, allowing them to focus their energies where they were needed most: on rescue. Included in what I wrote were articles for their websites, blogs and newsletters, adoptable dog bios and success stories, press releases, texts for fundraisers and brochures, e-mail letters to supporters, appeals for sponsors and donors, volunteers and foster homes, and grants.

Within months, I began emailing scores of slightly modified query letters to CAT rescue organizations. And as ironic as it sounds, I currently write for more cat rescues than dog rescues – alternately grinning and tearing up at every sweet and sassy, beautiful and bewhiskered face I see. To say I’m completely and utterly besotted with them – albeit at a safe distance — would be an understatement.

And when I was asked to write for Furry Friends, including Cat Tales articles and Furry Friends Fur-ever adoptive stories, I was both humbled and honored. And more than excited to be a part of their mission to help save homeless, neglected and abused cats find loving, adoptive homes while, at the same time, educating the community about responsible pet ownership and advocating for a no-kill status in the state of Washington.

And my writing doesn’t stop there. On the contrary. Each morning begins with a visit to that oh-so-familiar Facebook page where I comment on every post and affix an appropriate sticker to it! Not only does this ritual keep me “in the loop”, it also makes me a valued member of what I consider to be a most vital and vigorous family.

Then, at the end of each day, there is Mini, always and fur-ever Mini.