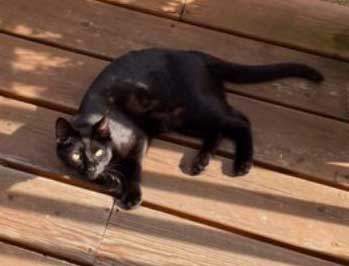 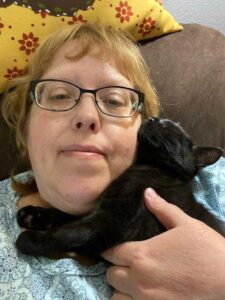 “I recently had to put down one of my two cats due to a progressive nerve injury,” says Karina. “I was devastated at losing my fun, affectionate seven-year-old Miles, and my other cat, Victor, showed signs of depression, such as hiding and not eating. I live alone, and I’ve always had pets in pairs, and it seemed so quiet with just one cat.

“After about six weeks, I decided it was time for a new friend, and began looking at rescue websites for a kitten. I wanted a kitten with lots of energy, lots of love to give, and who was good around other cats. I was looking at the Furry Friends website and saw a litter of black kittens, all with names that started with G. As soon as I saw Gunther, I knew that I had to fill out an application. I had had two black cats in college, and I have a soft spot for the mini-panthers (Victor is a tuxedo). 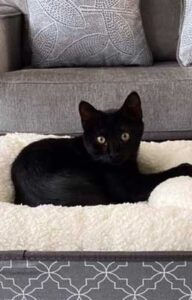 “I was approved and picked him up two days later. I renamed him Duncan because I adopted him the week of St. Patrick’s Day, and Duncan means ‘dark-haired warrior’ in Celtic. He came to my townhouse and spent a few days in my spare bedroom, but his energy was hard to contain, and after a long weekend, I let him roam the place. My other cat, Victor, kept his distance at first, but after a few weeks, he finally relented and started playing with this energetic bundle of fluff.

“Victor had come out of hiding and was soon eating well again — and I was grateful. He’s very quiet and calm, so I loved having an energetic kitten in the house. Duncan and Victor soon grew to be friends, and Duncan loves people. My boyfriend has fallen in love with him too. When he isn’t running around at top speed, attacking toys or my feet and sleeping in the sunshine, he just wants to be near me, purring like crazy. When I first adopted him, he was a teeny bundle of fluff, and now he’s grown into a very sleek, very big kitten. Despite all of the expensive toys I’ve bought, his favorite seems to be a box of paper straws … and of course, Victor’s tail! 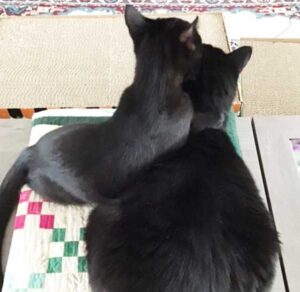 “Furry Friends is a great organization, and they have my full support for having helped me find the perfect kitten. I’ve bought something at their auction and a few items at their garage sale. I intend to continue supporting them and will always recommend them to anyone looking for a new kitty friend.”