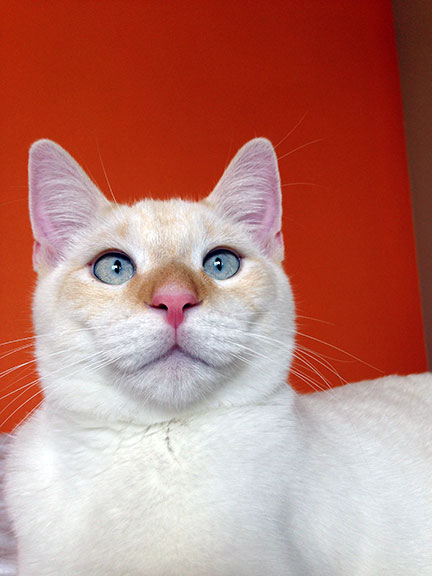 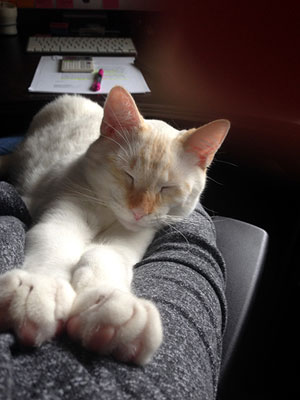 Long familiar with the wonderful world of feline love, the Jacobs family has shared their home with three special cats: Neeka, and sister and brother, Zelda and Leo. But the eventual loss of both Neeka and Leo left Zelda alone and the Jacobs’ house empty.

“I wanted ‘Zeli’ to have a friend her size,” explains Tara, “but our new kitty also had to be the right fit for our family. As a faithful follower of Furry Friends’ Face Book page, I watched the explosion of kittens last summer, and when Jack’s photo popped up, I showed it to my husband. Jack’s bright, spunky personality was apparent in the photo, and we knew we had to meet him. We set up a meeting at the home of Jack’s foster parents, and we were hooked immediately. He’s still the same, silly toasted marshmallow man that fell asleep in my arms after playing hard at that first meeting.

“We were so impressed by the obvious love Jack’s foster family had for him as they prepared him to join his future family. It was clear they had spent quality time with him: handling his feet; accustoming him to having his nails trimmed; teaching him to use the litter box (he was the first of his littermates to ‘get it’), and learning all of his quirks.

“When we brought Zelda to meet Jack, she was not at all impressed! But we decided to adopt him anyway because Zeli is basically very patient and easy going. After bringing Jack home, we kept them separated (unless we were there to monitor their interactions) until they began to warm up to each other. Although it took a few weeks, they now play together, and Zelda has accepted Jack as her wacky little brother. 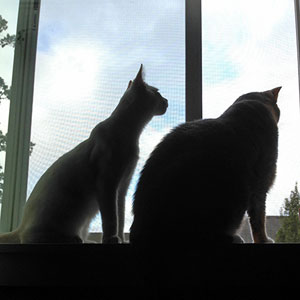 “He’s been a great addition to our family. He’s wild and crazy and loves to rip around the house as if it’s a racetrack, skidding on the wood floor as he turns the corners. He loves to cuddle and often gives us good, wet nose bumps along with a loud purr. And just like his sister, he seeks out attention — especially when you’re working — by lying on the desk or on your lap to distract you.

“Jack’s brought such joy to our home and we feel so fortunate to have him. Even Zelda agrees.”