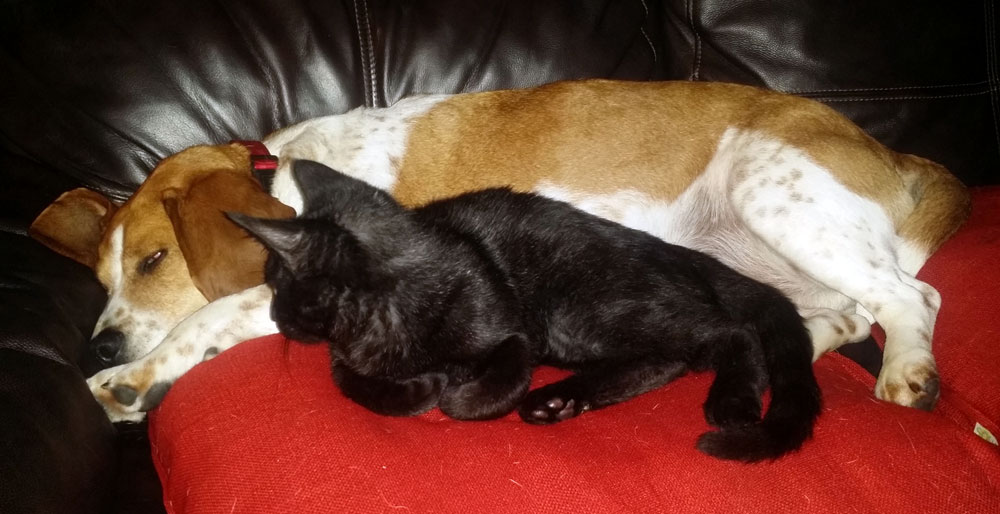 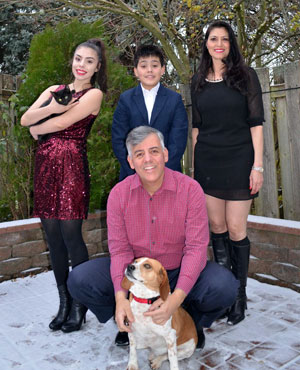 “I would like to thank you for the work you do,” says Fernando. “Bella, our 14-year-old daughter, and the entire family is very pleased and honored to have Liam in our home.

“Liam is our first cat, and when Bella, who always wanted a black cat, saw his photos on Petfinder, she immediately fell in love with him. We were extremely pleased by how quickly he adjusted to his new environment, which also included our dog, Astro. He’s not only been a positive addition to the family, but Bella’s taken her ‘kitty’ responsibilities very seriously.

“At first, I was worried about how Liam and Astro, who’s a Beagle, would get along, since Astro enjoys chasing squirrels. To my surprise and relief, he completely ignored Liam. As a matter of fact, Liam is the one who’s always chasing and attempting to play with Astro, even running up and down the stairs to get a reaction out of him! But he still ignores him. 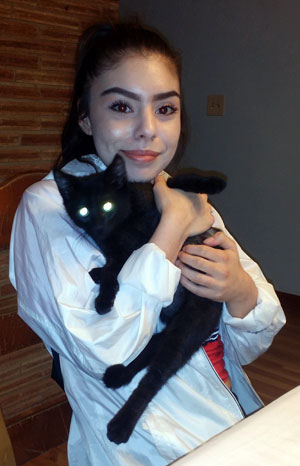 “Liam is very playful, and when he’s not running after the dog or picking up items left on the floor, he’s happily amusing himself with Astro’s old toys, chasing tennis balls and laser lights. For awhile, his favorite ‘toy’ was a green Starbucks cup cover, which I accidentally dropped on the floor. He got a half-hour of nonstop entertainment out of it, and I must say it was the cheapest and most effective cat toy I’d ever found!

“After he’s played himself out, he likes to sit by the rear sliding glass door, staring and meowing at the hummingbirds that visit our hummingbird feeder. Then, when he’s really tired, he’ll either lie on my lap while I pet him awhile or sit on top of the couch and sleep. He also enjoys having his tummy rubbed, gently biting your hand while purring away.

“When Bella goes to school, he’s mostly on his own. But her room is his sanctuary, where he goes when he doesn’t want to be with anyone else. And, of course, he sleeps with her every night.”